Commission rates can vary by brokerage and financial product. For stocks, there are two primary commission structures: per-trade (buffet) or per-share (ala-carte). The per-trade rates are also known as flat-rate commissions. 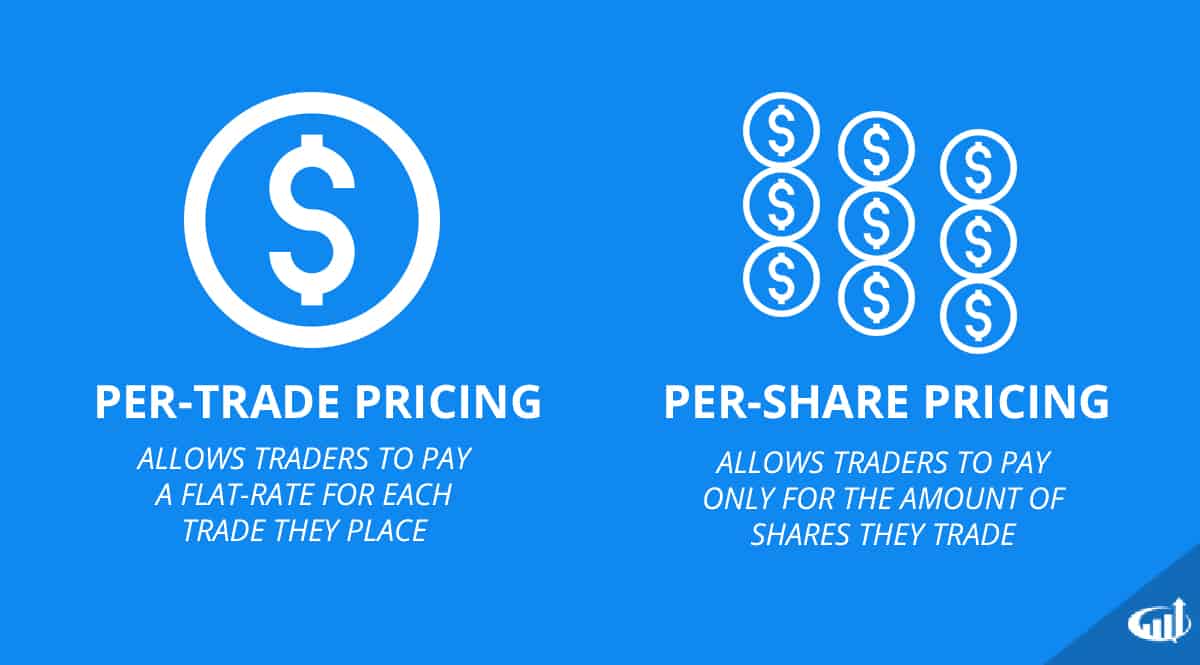 Day traders can choose to pay per share or per trade. Both commission structure have their advantages.

These are flat-rate commissions that charge per trade, up to a specified maximum share size. Like an all-you-can-eat buffet, the food is sloppy and low quality (order fills) but a bargain for heavy eaters (large size traders).

Flat-rate commission trade orders are routed to a pre-determined designated liquidity provider, which the broker likely negotiated an order flow agreement with. Traders usually don’t have the ability to target specific ECNs or route directly to a preferred liquidity provider, which can often result in poor price fills. While the commission rate may seem cheap, the problem lies in the poor order fills and liquidity since only a single liquidity provider may be used under the order flow deal. This can mean the difference between getting an entry filled quickly at a good price versus having to pay a higher price on the fill, or simply not getting filled.

Per-trade pricing also can be very expensive with scaling in and out of positions. This is like a person with a small appetite regularly dining at buffets, but only able to consume a single plate.

For example, If a day trader wants to scale out of his 1,000 share position manually in smaller 200 share increments, using a flat-fee commission rate of $9.99 per trade, it would cost the day trader $9.99 to buy the original 1,000 shares. Each sell order he places to sell 200 shares would cost him $9.99 per trade. The total of six transactions at $9.99 results in a total commission cost of $59.94. If the day trader made a gross profit of $100, the commission costs would leave him with only $40.06 net profits. Commissions would cost him 60% of his total profits.

The per-trade rate benefits day traders that trade large size positions. A trader that regularly trades 5,000 shares at a time would only pay $9.99 at the flat rate as opposed to $25 at the per-share rate of 0.005/share.

Per share pricing is often preferred by active day traders who plan to scale in and out of positions throughout the day.

The per-share structure allows for traders to only pay for the shares they trade. This is the ala-carte version of commission schedules where a diner (trader) only pays for what he/she consumes (trades), like dining at a Chinese Dim-Sum restaurant. Naturally, traders with giant appetites will find it expensive to pay per dish.

The day trader using a $0.005 (half a penny) per share commission rate would pay $5 for the initial buy order filled for 1,000 shares. Each 200 share sell order would only close $1 resulting in a total commission cost of $6 for the six trades. A $100 gross profit on the trades minus the $6 total commissions would leave a $94 net profit. Commissions would only cost him 6% of total profits. This is the main reason why active day traders should be using a per-share commission schedule.

Day traders that implementing a scaling order strategy, buying and selling in smaller increments to favorably adjust average share prices, are the best fit for a per-share commission schedule. Many brokers also allow for a scaled commission structure where the per-share commission rate gets cheaper with greater monthly share volume traded.