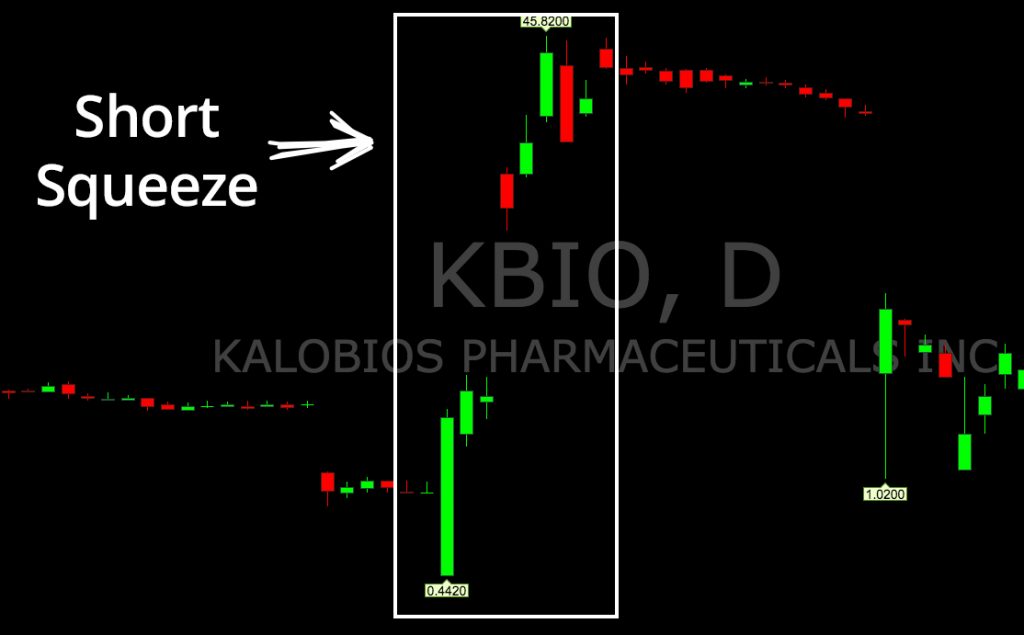 What is a Short Squeeze?

A short squeeze is a frenzied spike in a stock price resulting from desperate short-sellers trying to buy cover their short positions to prevent larger losses or margin calls. Usually the availability of short shares are limited or non-existent, which traps short-sellers from scaling shorts at higher prices. As the stock price rises, it triggers margin calls resulting in forced liquidations, in worst-case scenarios. The worst thing for a short-seller is when shares become unavailable to short. That’s like locking the exit doors in a burning movie theater. The buying action from covering short positions adds more fuel to the price spike. It is imperative to check the margin requirements and maintenance requirements on shortable shares. Margin requirements can change daily and failing to observe them can result in forced liquidations intra-day.

Many traders overlook this factor. For example, let’s assume a trader has $50,000 cash in the account with a normal $200,000 buying power on the normal 25% daytrading market (4 to 1 leverage intra-day). When the trader noticed an unusually large spike in stock XYZ, which is up $5 (25%) to $20 a share. He proceeds to short 5,000 shares at $20 using up $100,000 of his buying power. However, as the stock proceeds to squeeze higher, he tried to short more shares at $21 and his order not only gets rejected but he notices that his position of 5,000 shares has dropped to 4,500. As the stock moves to $22, $23 a share and losses become overwhelming, he realizes there are no more short shares available and his position keeps dwindling. He contacts his broker and it turned out that the margin requirement for the shares was 50%. This means that instead of 4 to 1 margin, he only had 2 to 1 margin. He actually spent his full buying power on the initial 5,000-share short position at $20 per share. When the stock squeezed higher, he was hit with forced liquidations in his account due to margin calls. This resulted in him getting stopped out at the higher prices $21-$23 per share and taking a 30% loss in his account. This example may seem extreme, but it is more common than you think. The moral of the story is to always check the margin requirements for any stocks that you may consider shorting ahead of time.

How to Anticipate A Short Squeeze

Certain stocks are more prone to short squeezes. Stocks with smaller floats are more prone to squeezing due to the limited supply of shares. Stocks with relatively small floats (under 100 million shares) and high short interest (above 20%) are most prone to short squeezes. The smaller the float, the higher the probability of a squeeze on a news or rumor based catalyst. Stock floats under 20 million shares are considered very thin and usually daily volume will be under 200,000 shares. This doesn’t mean larger share floats up to 100 million shares can’t squeeze. It’s all a matter of the catalyst and short interest. When short interest is above 20%, the probability rises. Most short squeezes trigger on some kind of news or rumor.

Short squeezes can last for days and in extreme cases can continue for weeks. Whole stock sectors can participate in a short squeeze when a white hot theme is in play. Biotech stocks are very prone to squeezing from clinical trial results, product announcements, FDA/FDA advisory panel approvals, partnerships and sector themes. Immunotherapy hit the mainstream in 2014 as a new novel therapy for cancer treatment and lit a fire under the leading stocks in the sector during 2015. Companies like Blue Bird (NASDAQ: BIRD) squeezed from $47 to $197 in 2015, Juno Therapeutics (NASDAQ: JUNO) from $34 to $69, Kite Pharmaceuticals (NASDAQ: KITE) $32 to $88, Esperion Therapeutics (NASDAQ: ESPR) squeezed from $36-$120 in 2015. This caused many more thinly traded smaller small caps and penny stocks to also spike as the sector saw a parabolic rise. In most cases, once the short squeeze peaks out, the resulting fallout can be just as extreme in a meltdown. ESPR peaked at $120.90 in 2015 before collapsing back down to $15s in 2016.

Often times a crowded trade can suck in a lot of short-sellers in anticipation of a price drop, but results in a completely opposite reaction. A lock-up expiration date on a recent IPO usually will result in a share price drop due to the abundance of supply hitting the markets. However, when the price drop is too ‘anticipated’, it can result in a completely opposite reaction. Timing is everything. For example, shares of Shake Shack (NASDAQ: SHAK) traded down to $48s into the first lock-up expiration on July 29, 2015 since the IPO. The IPO six months earlier only issued 5 million shares, which fueled a rally from $38 to a peak of $94 before selling off back down to the $40s in anticipation of the lock-up expiration. Short interest rose as shorts accounted for 2.3 million shares almost 41% of the float! SHAK spiked 20% on the day of the lock-up and continued to rise up to $73 in the following weeks as short sellers were squeezed. Shares were so hard to borrow that margin interest alone was as high as 100% on the rare shares that could be located!

Learn more about short squeezes in our free video course on short selling.