While originally developed by floor traders to indicate static support and resistance price levels based on the prior day’s trading range, pivot points are also regularly used with intra-day trading of stocks. Using the prior day’s open, high, low and close as the data inputs, a pivot point is derived through this formula:

Since so many traders follow pivots, they become significant inflection points that need to be followed just because everyone else is following the. Pivot points are often factored into algorithm and high frequency trading programs. Traders often place stop orders at or near pivot points. Most trading platforms have pivot point studies that can be added onto any chart. These are a static price tool, which can and should be combined with a dynamic trending tool like moving averages and a momentum indicator to pinpoint more precise entries and exits.

How to Use Pivot Points for Trading 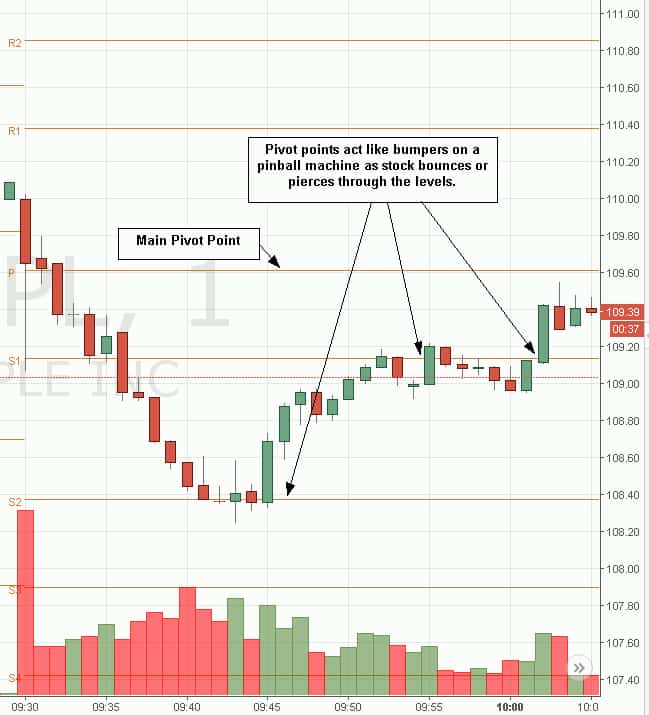 Pivot points can be used to pinpoint significant price lvels.

Like any support and resistance area, pivot point levels should be monitored closely when prices approach those levels. They will result in either a deflection or break through the pivot point. These levels help to simplify limit orders on targets and stop-losses. When a stock breaks out through the R1 pivot point, the next resistance area is represented by R2. Traders can use R2 as a price target to place limit orders to exit their long position and use trail a stop-loss under R1.

Since pivot points are re-calculated daily using the prior days high, low and closing values, they are only effective for the current trading day. Therefore, only intraday traders will be able to utilize them as swing and long-term traders generally can’t. Wider time frame traders can try to calculate pivot points based on prior candle period closes if they desire. This will have to be done manually by hand since most charting platforms only calculate them based on the prior days data.