The Snapchat IPO was one of the most anticipated public offerings in a long time. Since the company turned down a $3 billion buyout offer from Facebook in 2013, the business world has been keeping a close eye on Snapchat, wondering what the future holds.

March 2, 2017 marks the date of Snapchat’s much-awaited IPO. Shares opened at $24 and hit an intraday high of $26.05 before closing at $24.48. Over 200 million shares were traded and current share prices value the company at around $30 billion.

As investors and analysts debate proper valuations and future price targets, we’re simply focused on the day trading opportunities this IPO provides. Whether you believe Snapchat is the next Facebook or the next Twitter, there is money to be made by taking advantage of the intraday price action, and that’s exactly what we did today.

This tweet (and others) indicated that the sentiment surrounding the IPO may start shifting. At the very least, traders may start becoming more cautious.

Here are the short and cover orders:

This is how that looks on the chart: 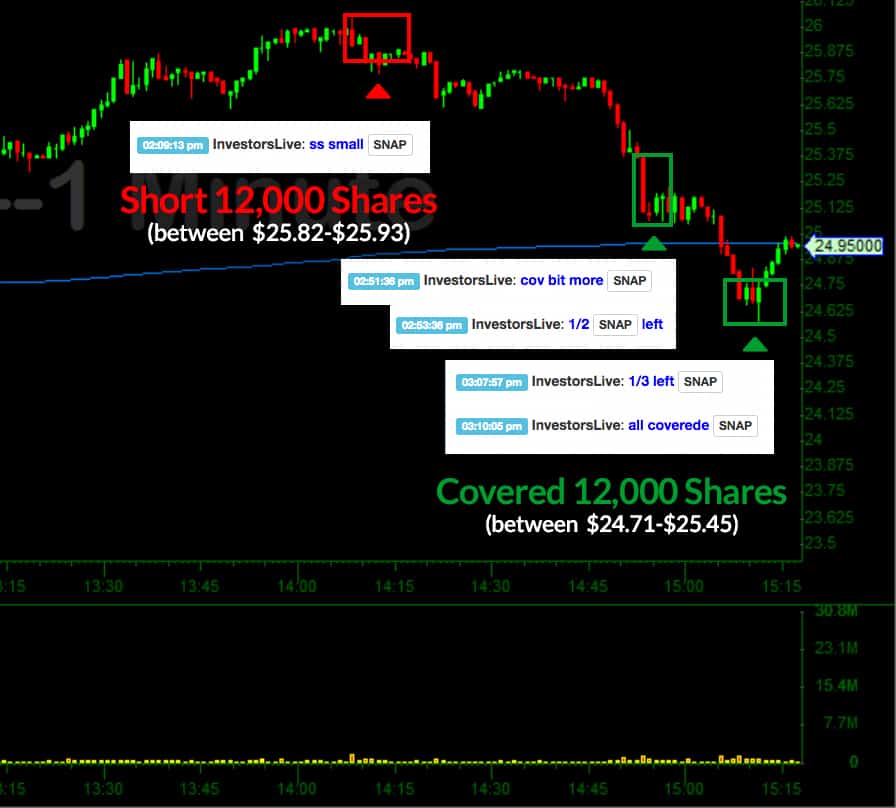 Cover some $SNAP patience on rest

There are a few things that made this a good setup.

Trade entry was majorly based on the same factors that led me into sizing into the TGT short yesterday as well. As you can see on both charts, both stocks were trending and the dips were getting soaked until they finally ran into a ton of selling (as shown by the volume bar). They re-tested & failed, re-tested & failed, and then started to unwind. The tide was shifting from buy all dips to "ut oh, maybe I should have sold that last push?"

On the $SNAP chart, this is shown at the $26 break. As the stock trended upwards, the next key level to break was $26. When $SNAP tried to break above, it was met with a bunch of sellers (see volume bar) and stuffed back down. 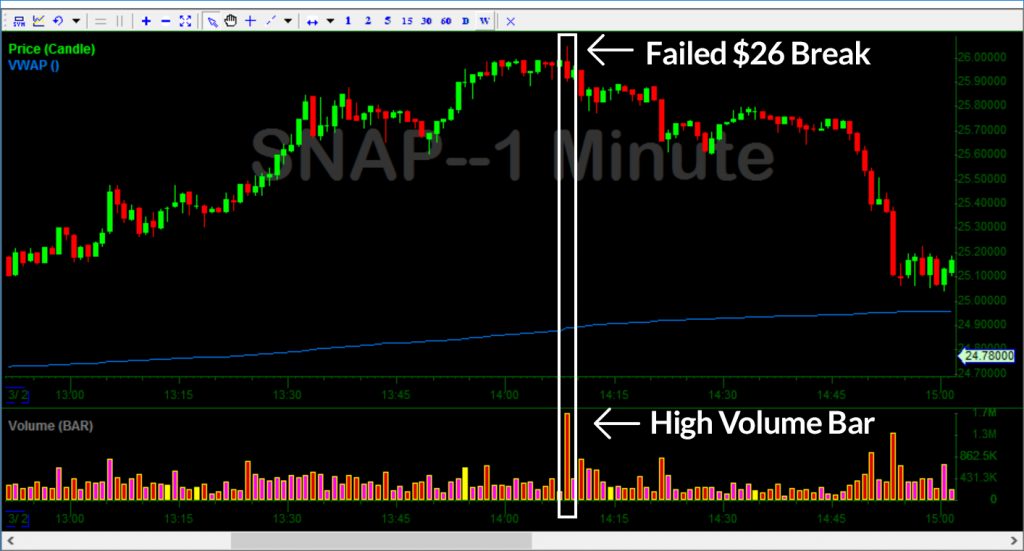 You can see a similar move on the TGT chart from yesterday. 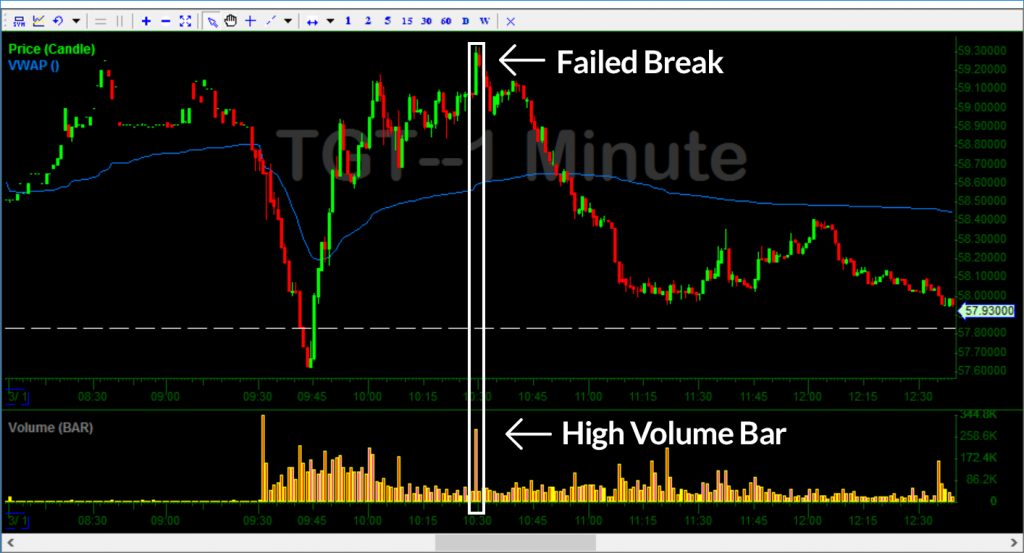 TAKEAWAY: See how a stock reacts to key price levels. In the case of a failed breakout and failed retest, you can initiate a short with a risk at the high-of-day.

$SNAP has a bullish trend for the first half of the day. Around 2PM the stock failed to set a higher high and the bullish trendline was broken.

break or cause to break suddenly and completely, typically with a sharp cracking sound. 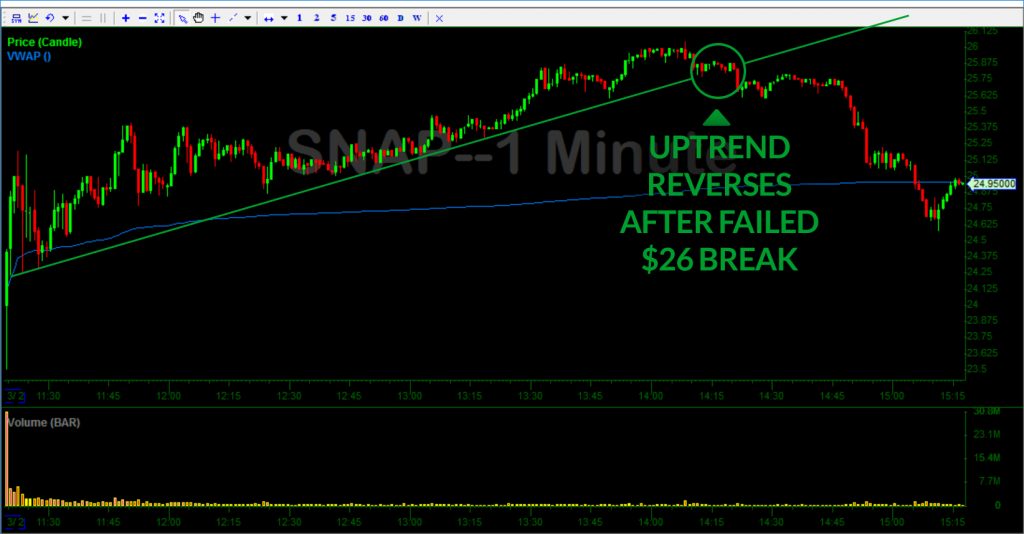 TAKEAWAY: Don't fight the trend! If you are looking for a short entry, wait for the trend to break

Although the initial short entry was very close to the high-of-day, this was not a case of shorting just for the sake of shorting. Momentum had slowed around 2PM, giving the opportunity to open a started position with a risk based off of the high-of-day price.

TAKEAWAY: Before entering ANY position, know your risk (price level). This allows you to choose a proper position size and helps you avoid surprise losses. 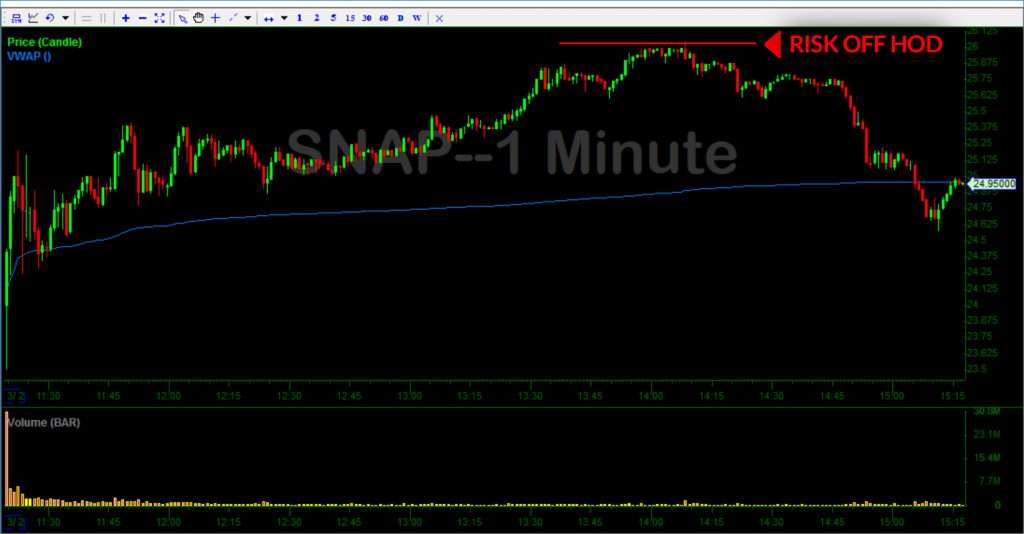 Snapchat traded over 200 million shares today, which equates to billions of dollars in $ volume. This means it was easy to get in and out of positions quickly.

If you find yourself chasing stocks or getting bad entries due to a wide spread, start focusing more on liquidity.

TAKEAWAY: Trade stocks that provide the liquidity you need to get in and out of positions with ease.

The day was getting late and Snapchat was initially priced at $17.  No one had taken profits on the intraday move yet - just steady grind through the day. As we come into the 2-3PM hours, we will often have a decent size pull back. Sometimes the stock will continue on to new highs BUT it takes a break filters out any sellers on the fence before carrying on trend. This trade was simply anticipating that move - had I been wrong the .10-.15 risk vs. .30-.50 + (in this case $1+) reward was well worth it.

TAKEAWAY: Think about how traders are going to react at the end of the day. Will they want to take the risk of an overnight hold or will they try to exit their positions?

There is always a lot of excitement surrounding IPOs. As a private company goes public, it can be difficult to assign a proper valuation. Accordingly, many traders and investors can get carried away. All it takes is a couple of news pieces of tweets to change the sentiment. In this case, there was the article about an analyst who gave $SNAP a $10 price target.

TAKEAWAY: Be aware of the sentiment surrounding a stock. The market doesn't always have to be rationale but it's important to focus on how other traders may be thinking.