One of the most popular questions I get where I have to repeat myself over and over again is, "What is a “stuff” move?"

I had a strong feeling that OMER was about to really cave in. I had been actively monitoring this name all morning and watched how it reacted on each push and each dip. I thought that, although it was hanging on, it seemed to be really heavy (term I discuss in my educational products quite a bit) and was pretty much convinced that this was not going to have the staying power it needed (like AQXP did.)

Everyone wants to be part of the next big mover but the difference is in the chart. Could I have been wrong? ABSOLUTELY.

Trading into a parabolic move works 99 times out of 100, but the one time it doesn’t (like AQXP), not only do you blow all your gains from the prior 99 parabolic trades that worked, you end up in a ridiculously bad spot because you kept thing, "how the HECK could it go that far?"

So, as I say time and time again the parabolic move is NOT to be messed with, especially if you're a new trader, and even if you’ve been around the block once or twice. Whether you want to believe it or not, there will be a time that you make a bad trade, blow through all rules you set forth and have to rely on that ‘oh shit handle’ number we always talk about. Have that MAX number you’ll take a loss at NO MATTER WHAT! Keep yourself in the game. Most don’t have this number and that’s why many traders have a tough time.

Waiting for that exhaustion candle is important, many times into a whole or half dollar. I have no interest in having the best entry and best average on any given name. Although it may be a sweet entry, was it an ideal entry? Was it high risk? Was there something you could risk off? A lot of people get confused that just because stocks are up, they are shorts! In this market, that’s a BAD idea. It’s import to join trend and not try to predict it.

Check OMER here as it surges on the front side towards $30 magnet – note the volume coming into that move. This is one thing I look for - higher than average volume into a break out. If it’s BIG volume on the move, it’s likely that it’s going to eventually pull back IF the next re-test of a breakout fails.

I was patiently waiting for OMER to come in. I prefer to see a few lower highs and then, once it re-tests and fails at a particular level, I start to watch that level for a trade. That level for me was $28.40s. I wanted to see $28s peak, re-peak and peak again before I was committed for any size. Yes, I’ll start in very small on the push, anticipating the move, but until I see $28.40s become a peak a few times and $28 confirms, I do not have a good set risk vs. reward to start scaling into the trade.

Trading the STUFF move is about anticipating a few things WITH an educated risk in mind.

Keep this in Mind

1. The "stuff" level at which a breakout/squeeze may occur if it breaks and holds trend.

2. The "stuff" level is many times that spot where you've been short and you're on the edge of your seat about to cover and don't. Then it happens again, re-test ... and bam you cover ..... ANDDDDDDD it's the top! (After many times of emotionally covering into the pop that ends up being the top, I've realized a few things).

3. The stuff level is also the level where everyone is excited and chases the break out.

So -- WHAT HAPPENS when that level is tested, all these things occur, the volume SPIKES and it doesn't go up? What next?

That's where this trade comes in !!

So given my bias and assumption that we were about to get a nice big ‘stuff’ move I went ahead and started recording so you can once again see the raw footage AND commentary in the live chat room to go along side it.

I would encourage you to read it along side the commentary.

If you have any questions about this move, we have a webinar tonight and you can ask questions here. If you're not a member yet, there is still time to join and catch the webinar at 8PM EST.

Here are my P&L's for the trades: 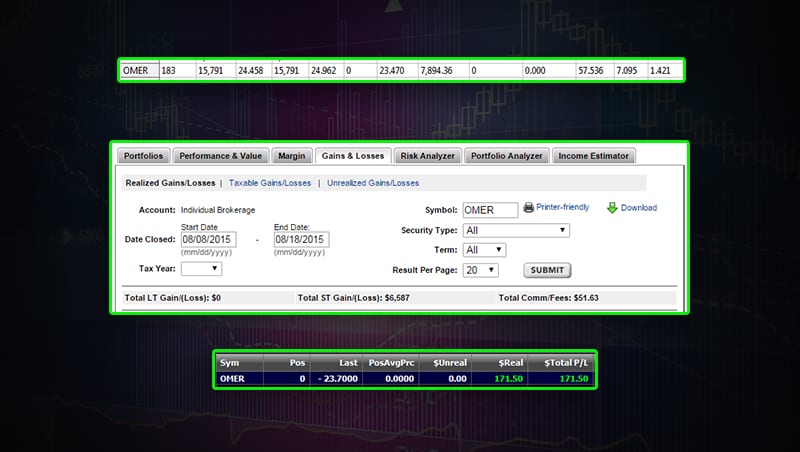 Here is the Video Recap

(no sound it's all discussed in the post and below)

Here are the Chat Logs

[Aug 18, 2015 11:51:51 AM EDT] InvestorsLive OMER any good 28s ramp that fails if it grinds/holds no interest to fight the short - this trade is ONLY into strength and not for new traders dont like any size unless 27s get heavy -- just fwiw

[Aug 18, 2015 11:59:16 AM EDT] InvestorsLive 28s action is what I want to see stuff for the trade as I wrote -- but again not for new traders I'm just speaking out loud in hopes that traders learn stuff from these levels what stuffs look like and what sorta action I am interested in