[WEEKLY LESSON] Why Timing is the Most Important Factor in Trading

Day trading is a game of prediction, and like anything involving prediction, timing matters.

Timing is one of the main factors that separates a good trade from a bad trade. Furthermore, timing will determine the profitability of your hypothesis. You can be “right” and still lose money if your timing is off.

For example, the hypothesis “the market is going to crash” holds very little value on its own. It’s vague and open-ended. The obvious response to this hypothesis is, “when!?” One could make this hypothesis right now and likely be proven “right” in the next couple of decades.

To further illustrate this example, take the concept of “stock picks” that market analysts love to flaunt. Let’s assume AAPL was labeled a strong buy at $130/share in early 2015. By early 2018, the predictor could claim credit for a 50% gain as the share price reached $195, but this doesn’t paint the full picture. It neglects to mention the 10-30% unrealized losses an investor would have endured multiple times in the three years preceding 2018. Calling AAPL a strong buy with a defined timeframe of 3 years would have been accurate, whereas the claim that AAPL was a strong buy with a defined timeframe of 1 year would be completely false.

As traders, we are constantly trying to predict market movement. You may not consider yourself a “predictor” but that’s exactly what you do every time you enter a trade expecting to make more money than you put in. Of course, traders work on shorter timeframes than investors, but timing is important nonetheless.

Therefore, you need to adhere to the following rules:

Rule #1: Define the Timeframe for Your Trade

Diligent traders think about entries and exits before they enter a trade, however many neglect the timeframe of the trade.

It’s important to define a timeframe for a trade before you enter a position. This is how you avoid turning a day trade into a swing trade into an account annihilator.

Without a defined timeframe, it’s easy to become a bagholder.

I see this all of the time with new traders, especially those who value the “story” behind the stock.

It goes something like this: “Company XYZ is about to explode. Get in now.”

While this thesis may be accurate (although, unlikely), the logical follow up question is, “when?”

Time as an Indicator

There's another added benefit to timing your trades - time itself can be a buy/sell indicator.

Traders are accustomed to making decisions based on price (i.e. buy/sell when a stock hits "X" price), but timing can play an important role as well.

Timing can help you determine whether or not a trade is going to work out (often times, before your stop loss triggers).

For example, if you expect a stock to react to a breaking news story only to realize the market doesn't care, you may exit the position before your stop loss hits. In this case, you allow time to disprove your hypothesis before price (a less costly observation).

Once you’ve defined your timeframe, you need to define your risk tolerance. This is where you answer the question, “how wrong are you willing to be before you’re proven right?”

Take the example of AAPL from the introduction. The stock experienced 30% losses before achieving a 50% gain three years later. Would you have been willing to watch your account drop 30% multiple times over a three year span?

There’s no right answer. The key is going in with a plan.

Regardless of how confident you are in your hypothesis, you need a failsafe; a point where you recognize that protecting your capital is more important than being right.

Rule #3: Time Your Entries and Exits

Once you have a hypothesis with a defined timeframe and risk threshold, it’s time to execute.

Your entries and exits will ultimately determine the profitability of your trades.

Take the following graph as an example: 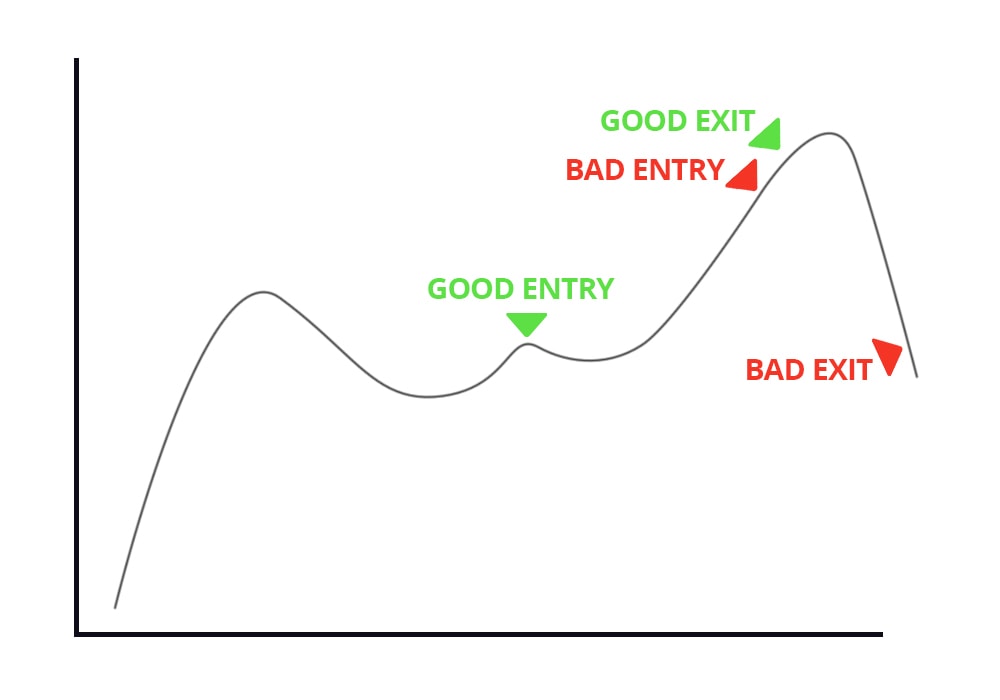 A trader may accurately predict a breakout (i.e. being “right”), but the entries and exits will ultimately determine the quality of the trade.

Apply it to Your Trading

Think about timing whenever you plan your next trade. What is the timeframe for the next trade you enter and why?

Timeframes don't need to work out to a "t", but they can help guide you.