Do ALL Day Traders FAIL?

While some people observe success and become obsessed with cracking the code, others instantly dismiss success as a sham. Pessimists view success as a product of luck and circumstance or, even worse, an intricate deception.

This mentality is particularly prevalent in the trading industry. We’ve heard it all before.

“You’re better off going to a casino than day trading.”
“A monkey could have the same success as a day trader.”
“You can’t compete with algos and high-frequency traders.”
“There’s no such thing as a successful trader.”

We’ve spent a lot of time discussing trading psychology in the past, so this article will not be focused on how detrimental this overly cynical mindset is. Instead, we are going to look at the probabilities of success in trading.

We’re going to show how the pessimistic notion that all traders fail is just as improbable as optimistically assuming every trader succeeds.

An Introduction to Odds

Let’s start by looking at the odds of a trade.

The outcome is dependent on your ability to accurately predict a stock’s price movement. (Keep in mind, you can predict price action in either direction - up or down.)

For now, we’ll use long trades as an example.

When you place a long trade, you are betting that a stock will go up in price. So, what are the odds of that happening?

The odds will vary, but for the sake of this elementary example, we will say they are 50/50. If the odds of the price going up were anything less than 50/50, they would be in favor of the stock price dropping, and you would have a favorable short position. Therefore, the 50/50 assumption is fair for our theoretical example.

We will call this formula the profitability equation. 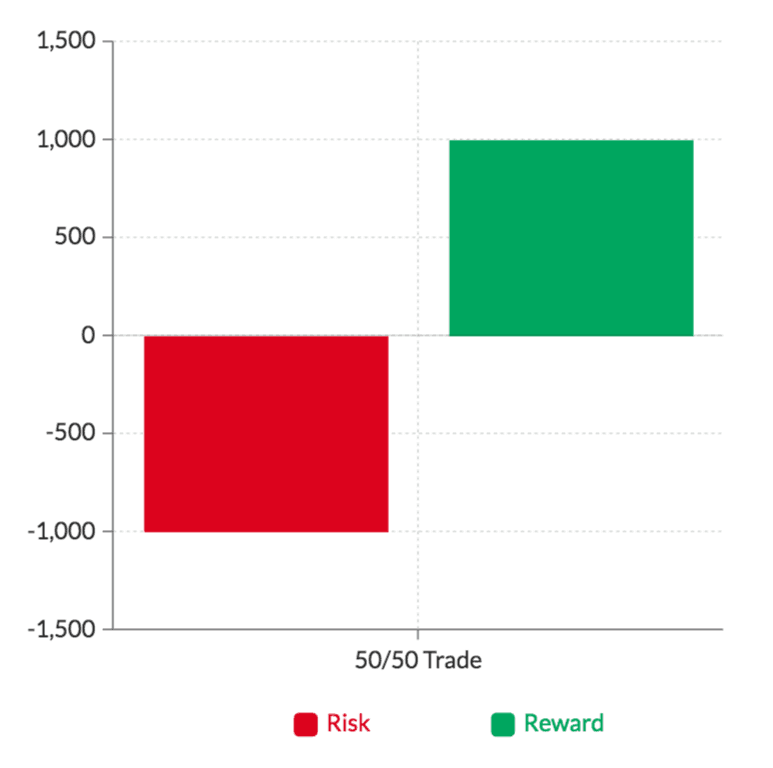 So, with sheer luck alone, the expected return of a trade is $0. These are the same odds as betting on a coin toss.

Of course, we know that trading isn’t as simple as a coin toss, so let’s dive deeper.

The example above is over-simplified and neglects a few key principles of trading. Let’s look at these principles and how they would impact the equation.

In the example above, we assumed that both the risk and the reward would be $1000. This is a double-or-nothing bet that a trader would never take in real life. 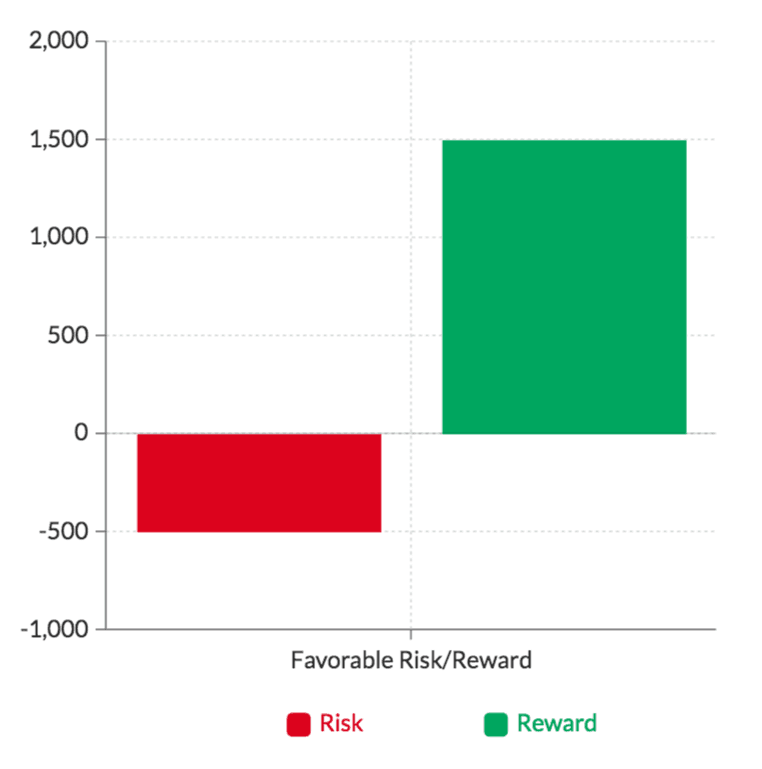 Using this calculation, we can see that 50/50 trades have a positive expected return when we hedge risk properly. Of course, as traders, we aren’t looking to leave our fates to lady luck. We want to find situations in which the probability of success is higher than the probability of failure.

CASE 1 (Fundamental Analysis): Assume a company valued at $10 million reports that they lost a $2 million contract. Do you think the stock will go up or down? More specifically, what are the odds? Obviously we can’t confidently determine the exact odds BUT it’s safe to say that negative news is more likely to trigger selling and send the price down.

CASE 2 (Technical Analysis): Assume that you’ve analyzed the stock charts of every single public company since the inception of the stock market. You find that 80% of the time when a stock breaks out above it’s 52-week high, it proceeds to run another 10%. Using this historical data, you could assume that a stock breaking above its 52-week high is a bullish setup in which the odds of a price increase are higher than the odds of a price decrease.

Let’s see how this would impact the profitability equation.

The examples above illustrate the methodology behind trading.

The goal of a trader is to find high probability setups and place trades in which the potential reward outweighs the potential risk by at least 3-to-1. We see how this can shift the profitability equation in favor of the trader.

Of course, this isn’t to say that trading is easy, and traders are guaranteed to make money. They are not. Remember, we are simply discussing the idea of whether or not traders can be consistently profitable.

Trading, in theory, is a lot easier than trading in practice. That said, the rules still hold true.

This approach allows us to use a trader’s historical returns to estimate future returns.

We would use aggregate data that would include: 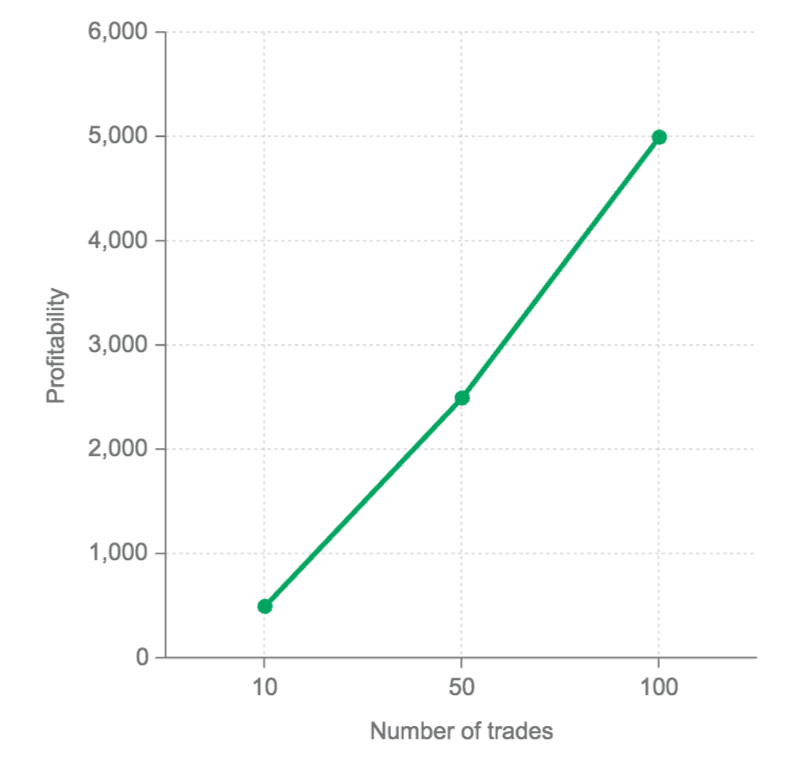 The trader can increase profitability in the following ways:

We’ve done the math to show how traders can be profitable, but we also know that the majority of traders are not.

The calculations above are not intended to make trading seem easy, nor are they intended to make it seem like traders are guaranteed to be profitable. If you’ve ever listened to a pitch for an MLM scheme or timeshare opportunity, you know that what sounds super simple on paper is much more difficult in real life. Complications always arise.

So, what do those complications look like in trading?

There are only two parts to our profitability equation, so let’s look at where they can go wrong. 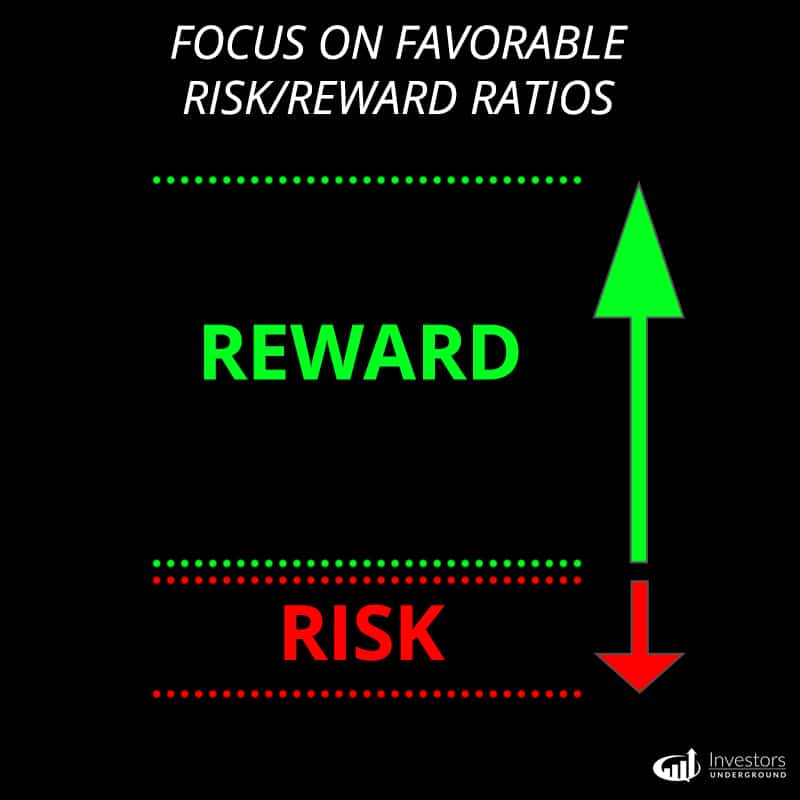 Unfortunately, emotions creep up, and a variety of situations may unfold. A trader may ignore their stop loss and take a bigger loss than anticipated or ignore their profit target and turn a winner into a loser. This behavior, compounded over time, diminishes the expected return of every trade.

The second part of the profitability equation is the “high probability setup.” These are the setups that have favorable odds (i.e., ≠ 50/50). 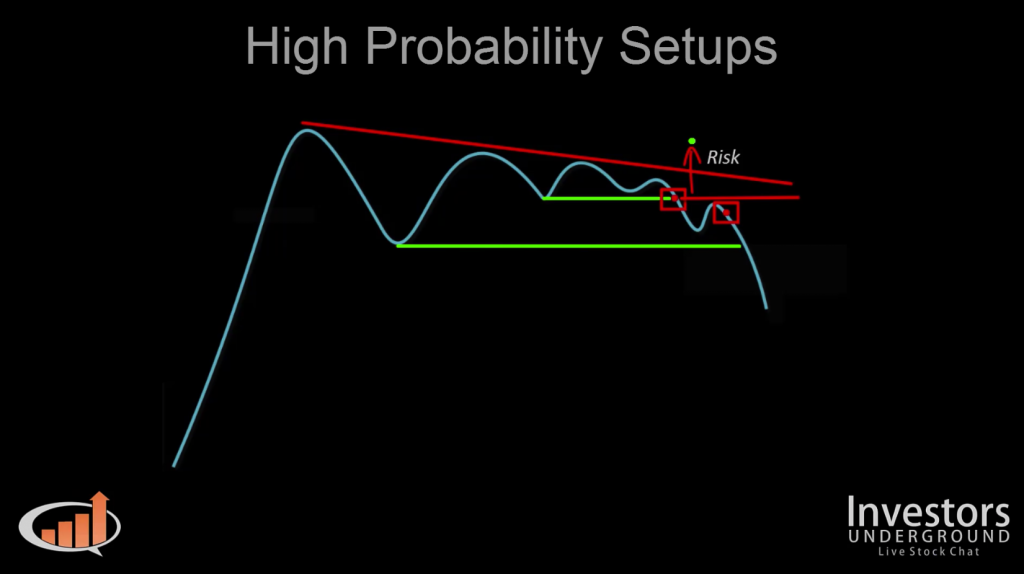 Unfortunately, there is no way to forecast the odds of a trade with absolute certainty (especially when you are getting started). Many traders mistake low probability setups with high probability setups and enter trades where they have no edge. These miscalculations range from mistakes of naivety to downright foolishness.

Once again, this behavior compounds over time and converts the profitability equation into a loss equation.

If you want an example of high probability chart patterns, watch the video below.

Let’s look at a quick example of how the profitability equation is impacted by these common trading issues.

The profitability equation is delicate and small changes to the inputs (i.e., the trades) can have a major impact on the output (i.e., profitability). 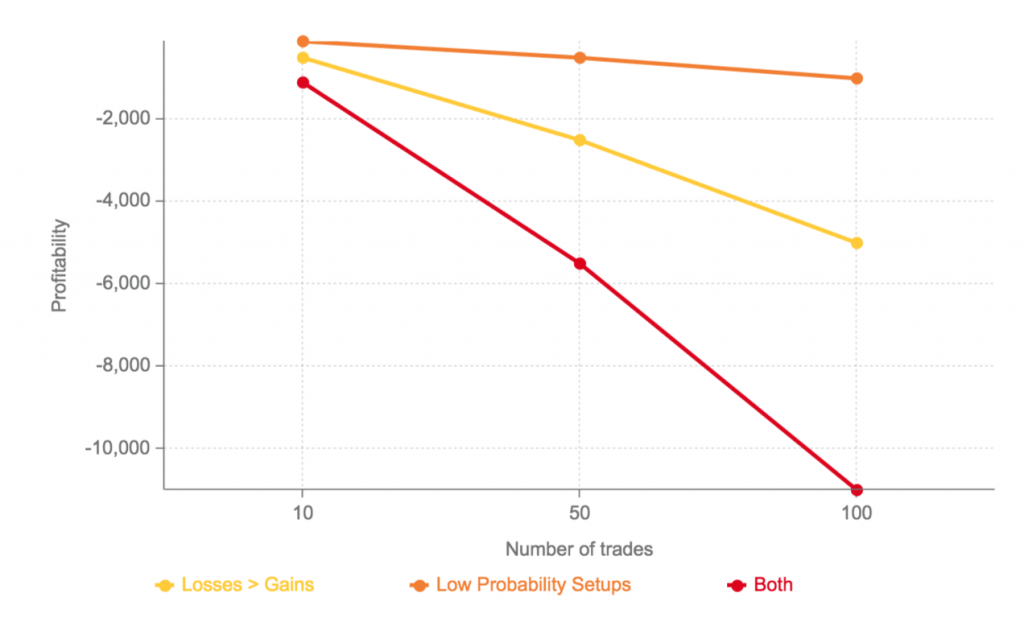 Trading is not for everyone, but you should at least have a reasonable understanding of the odds before dismissing the legitimacy of the game. Up until now, we’ve been having a rational conversation. We’ve been discussing things logically and looking at both sides of the argument. Next, we’re going to discuss some irrational counter-arguments that should be immediately dismissed.

The Markets are Rigged

Some people believe the markets are rigged. This group doesn’t view the odds of a trade as 50/50. Instead, they believe the odds are heavily weighted against the trader.

So, when someone says the markets are rigged, the logical follow-up question is, “Which direction are they rigged to move in?” 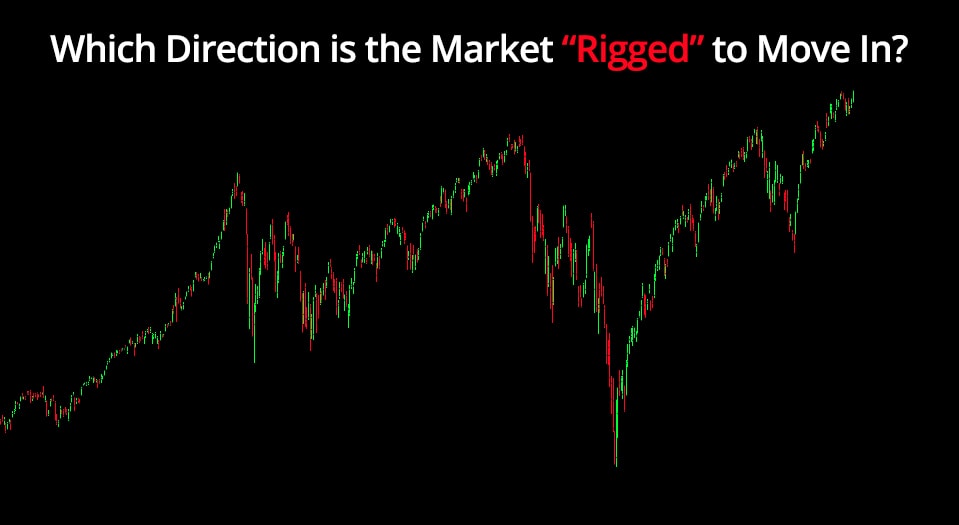 You Can’t Compete With Algorithms and High-Frequency Traders

If you think the system is rigged, it’s time to start pointing fingers. Algorithms and high-frequency traders are generally the first culprits named. These high-speed trading systems combine advanced technology with programmable trading strategies, and they are often viewed as unfairly advantaged market participants.

Fairness aside, high-speed trading is irrelevant to the question of whether or not traders can be profitable. Daily trading is not a zero-sum game. At the end of the day, there is NOT an equal amount of winners and losers.

High-speed platforms are not trading against you specifically. You are not competing. In fact, they are trading alongside you. They have the same goal - to take profits from the market.

Think of this like a coin toss in which you are making predictions alongside a computer. Even if the computer somehow has an advantage, you are not disadvantaged. You can both guess heads, you can both guess tails, or you can choose different guesses.

With all of this talk of odds, one may misconstrue trading with gambling. It’s a banal comparison that is neither 100% accurate nor 100% inaccurate. It all comes down to the individual trader.

The market can absolutely be used as a vehicle for gambling. Let’s get that out of the way early. That said, there are some key distinctions between gambling and trading.

Unlike gambling, trading can have positive expected returns. The game is not rigged.

In games of pure chance, you can never find an edge.

In trading, you can. 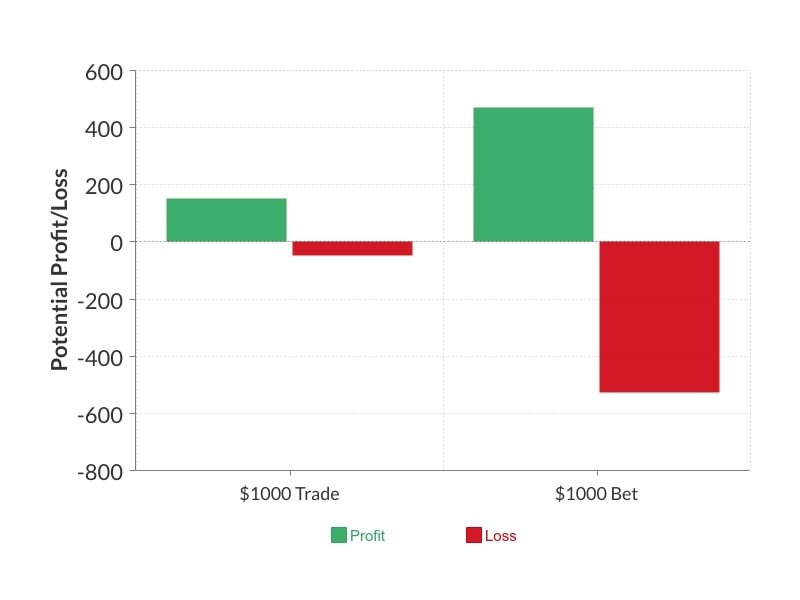 Many investors (and aspiring investors) believe in the “buy and hold” investment methodology. They recognize that great investors like Warren Buffett and Peter Lynch have made fortunes using this investment strategy, but they struggle to name any successful traders (so they must not exist).

This group believes you can predict stock price action but only across long periods of time. Intraday price fluctuations are considered to be “random” noise that should be ignored. 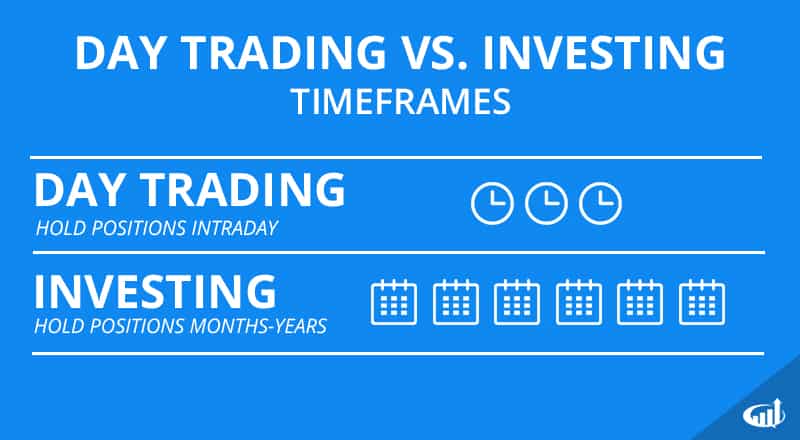 As we know, intraday price action is not just noise. While “buy and hold” investing has proven to be lucrative over the past century, it’s not the only way to make money.

Many predictions are actually easier to make across shorter timeframes. There are fewer variables in play, and the intraday “noise” is actually less susceptible to unpredictable events.

Investors confuse trading for noise, but traders do NOT aim to predict “randomness.” A stock’s average price fluctuations are of no interest to a trader. Instead, traders focus on momentum and volatility - seeking high-probability setups in which price action is more predictable.

Last but not least, let’s address the idea that 90% of traders fail. This number is thrown around quite a bit.

To be fair, let’s get two things straight:

Two key points are worth addressing.

By its very definition, being above average has unfavorable odds. Whether you want to run a successful business, become an elite athlete, or snag a six-figure corporate gig, the odds aren’t in your favor. There’s a reason why the most coveted roles in our society aren’t easily achievable.

Defying the odds takes hard work and dedication. If you want to live an above-average lifestyle, you need to beat the averages.

The idea that trading success has low odds shouldn’t come as a surprise. When we hear people say "trading is too difficult" or "most traders fail," the obvious response is "no kidding!" If it were easy to be your own boss and generate exceptional wealth, everyone would do it.

The traders who succeed actually LOVE the challenge. They become obsessed with beating the odds - and they eventually do. Trading success is difficult but possible.

Take income as an example.

Certain environmental factors can have an impact on success.

Do you think 90% of traders at successful hedge funds and prop firms fail? They don’t.

Not all traders are created equal. Therefore, the success rate will vary by trader (or groups of traders).

We've been running IU for over 10 years and we've seen every type of trader you can image. Some traders come to the market ready to start pushing buttons and making easy money. Others take the time to learn a skillset, test their knowledge, and scale their strategies. Needless to say, the latter group gets better results.

You need to be committed if you want to succeed. You can further increase your chances of success by surrounding yourself with the right people and getting access to the right resources.