Hopefully everyone had a great week trading. Last week had clean trends that picked a direction and pretty much stuck to it. This week was a bit choppier with things giving head fakes before finally making the move. Having your trade plans dialed in took a lot of the emotion out of it and saved a ton of mental fatigue.

If you are on the fence about joining the IU community reach out to me before the end of November as we are doing a price increase starting December 1st. If you are a current member the change won’t impact you.

"I" see what you did there

Teamwork was in play on I Monday. This was one of the ones that looked to be breaking lower before recovering again and again. @Donaldkey noticed the odd option put activity and that was the signal for @InvestorsLive and @Elkwood66 to start in again short. 13 minutes later the news came that the FCC would be auctioning off the C-Band. Whomever took those options has about 3 million reasons to be thankful this week.

ANTX was news on Tuesday. Like always @Markflowchatter is first with the headline. Speaking of being thankful I am appreciative of our guys posting news into the chatroom. Not only do they give a ton of trade ideas but also help keep members out of trouble if news comes out on trades they are already in.

Getting both sides of the move

On Wednesday XXII set up nicely for not only a long trade but Nate ended up flipping to the short side to nail it both ways. Knowing key levels made this trade plan simple to execute.

MYOV on Thursday was another planned trade that stuck to the levels well. They ended up not being able to clear the seller at the top (it made it there on Fri) but great plans usually equal great trades.

To round out the week @Jscherniack was ready prior to the opening bell for his trade. Here is his plan from his scan and the chart. LK has given us a lot of trading opportunities over the last few days both long and short. 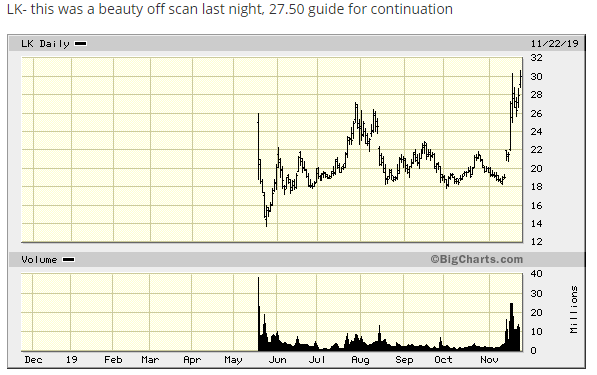 Happy Thanksgiving to everyone. Reach out to me [email protected] if you have any questions or if I can do anything to help.