Another great week in the books. Trades this week were pretty straight forward without many headaches. A lot of that is a product of having a plan and sticking to it. So many of these tickers laid out the key levels if you just looked left. Knowing those levels and entering and sizing based on them gave not only great trades but trades you were able to add size to.

This weekend Nate is sending out the chat logs from Friday so you can see every post in the IU chatroom as they happened. Sign up here. http://investorsunderground.com/freechatlogs

When I talk to new traders, they are always concerned that they can only trade the first hour of the open or the last hour before the close. I tried to pick a few different times during the day to show no matter your schedule or account size there is opportunities for all.

The CLVS trade on Monday was one of those look left charts. Here is @InvestorsLive game plan from the scan on Sunday evening. As you can see the levels on the scan were pretty much the road map.

OSTK on Tuesday announced an at the market offering and @Amp_trades and @TraderTexMex were all over the news. Amp beat Tex by 1 second. Then @Elkwood66 pretty much nails the bottom ticks on his covers.

Making his 2nd appearance on the weekly recap, @DonaldKey with the news of Disney reporting 10m subscribers to their streaming service. It ran on that news until the close with chances to add on pullbacks.

Know what you own

TROV had some positive news pre-market but it became clear quickly this move was not going to live long. Stress free trade bell to bell.

Nate had been long on LK pretty much all day on Friday. Once it started to speed up, he made his plan to sell his long position and flip it short. $1 fade in 20 minutes. Great way to start the weekend.

A little bonus chart from Friday as well. I will just let the commentary from the chatroom speak for itself on Friday’s JD trade. 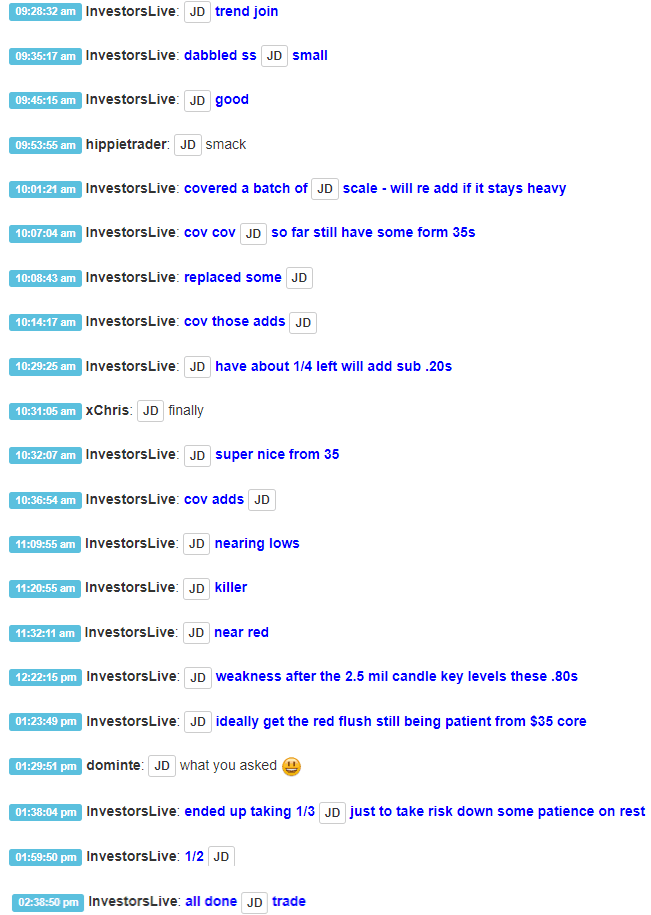 Reach out if you have any questions after the chat logs are sent out this weekend.