An Update on Momo Traders (with TONS of feedback!) 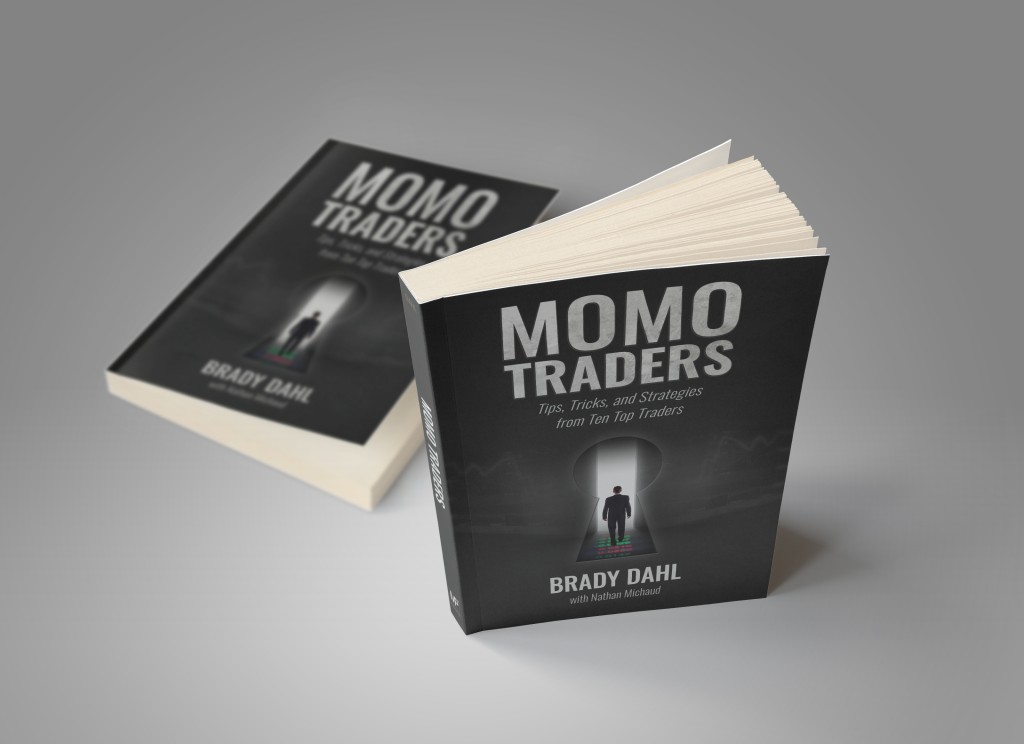 As many of you know, we released Momo Traders by Brady Dahl at the most recent Traders4ACause event. Momo Traders is a book packed with revealing interviews from some of the best traders in the world. The goal of this book was to give people a way to get into the minds of some of the top traders. These traders discuss their journey into trading, their trading styles, trading tips, and much more!

If you haven't ordered the book yet,
you can order a physical copy here.

Here are a few popular quotes from the book: 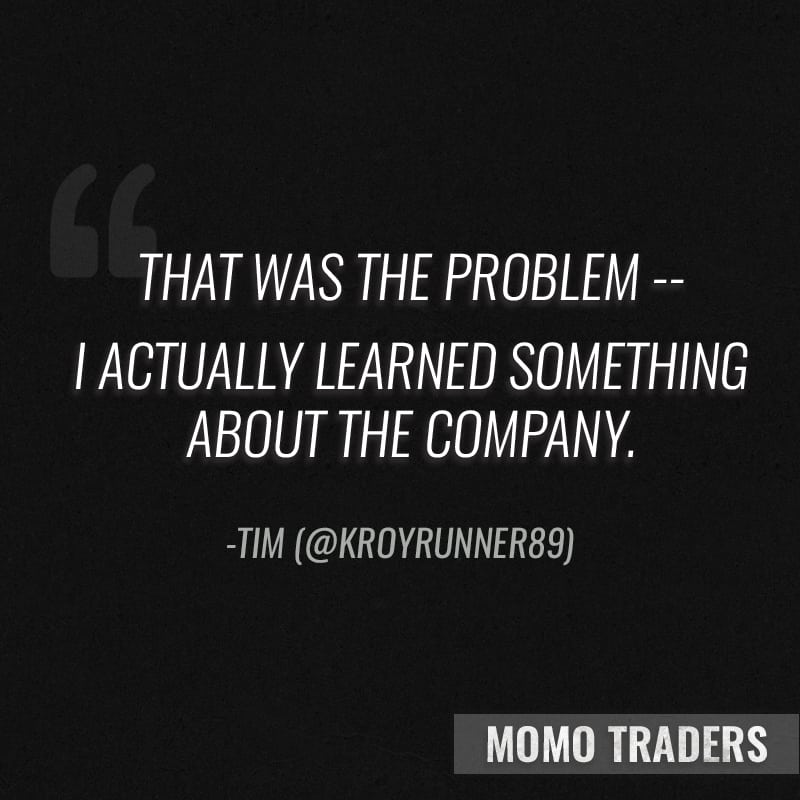 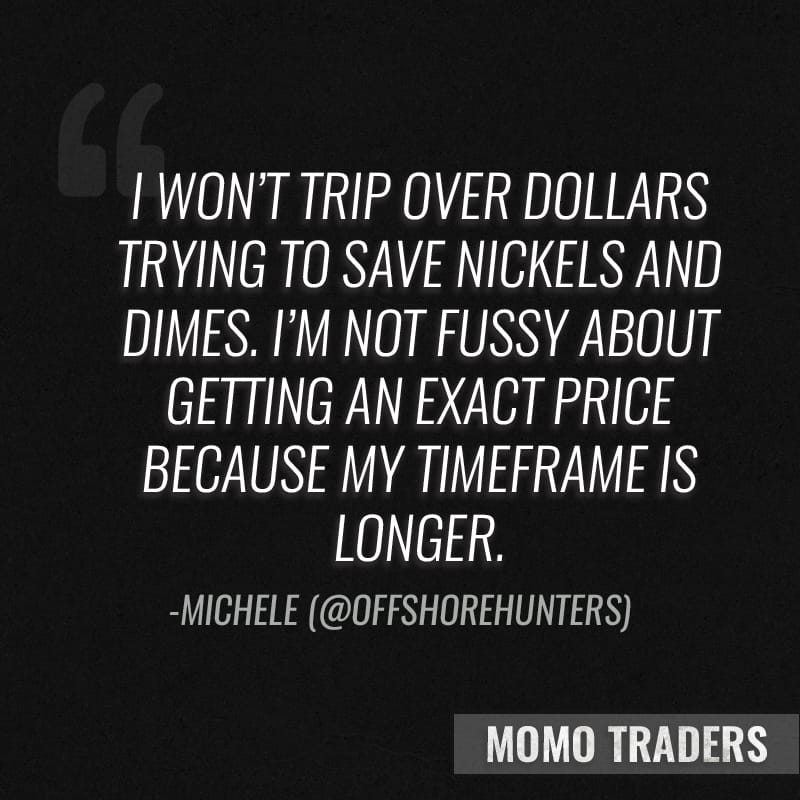 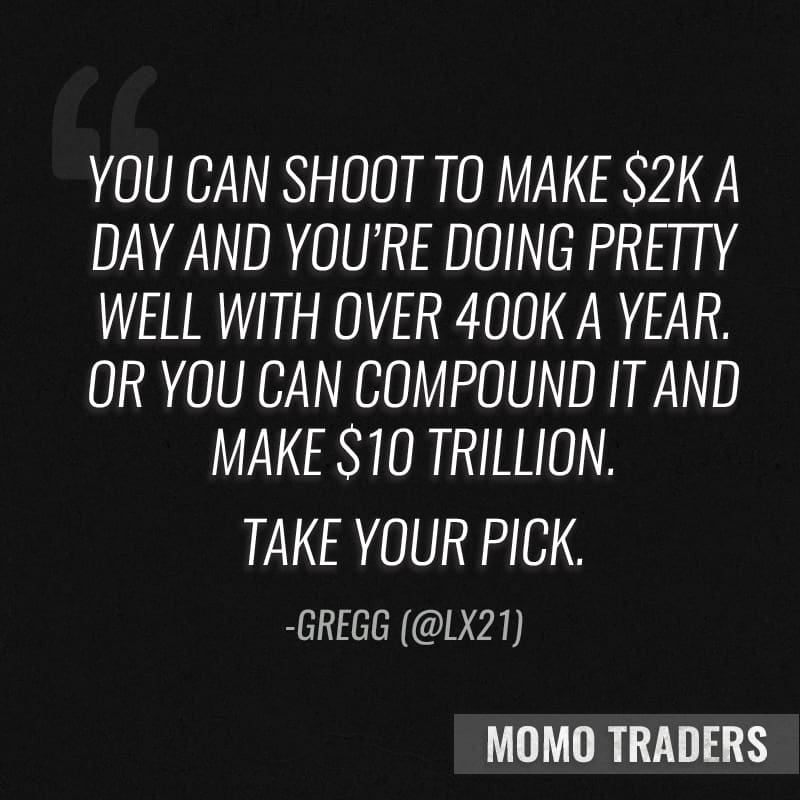 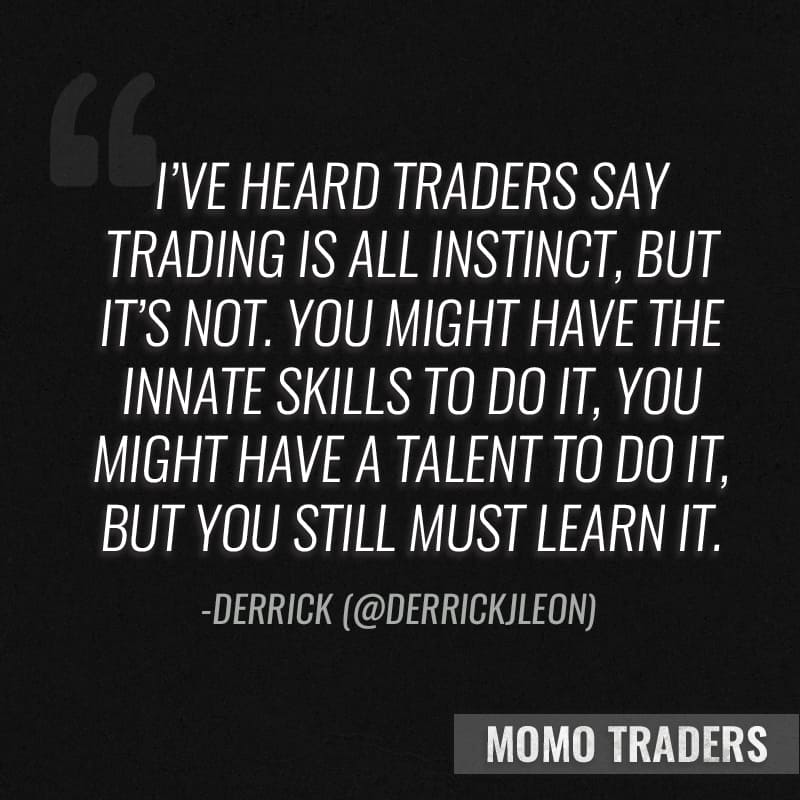 The book has been out for a few months now and the response has been phenomenal!

We've had so much great feedback - check it out!

We raised an extra $22,000 to help support Breast Cancer Research.

I called Brady on Oct 15th we shared the same thought: “Hey I’d like to park in my garage again, you?” So, I said how about this – from October 16th to October 22nd, I’ll match all book sales dollar for dollar!

When you see these traders posting screen shots of their massive profits now, they don't seem human. However, to read all of their stories, hear about their early struggles, and learn that they came from the same place that you did, is incredibly inspiring.

...does for Day Traders, what Jack Schwager did for Professional Traders when he first published Market Wizards.

Tim Bohen was kind enough to do a chapter-by-chapter video review.

And, of course, the celebrities have been all over Momo Traders 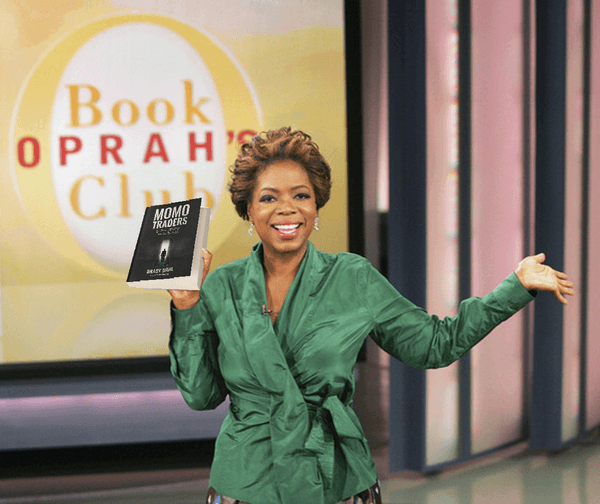 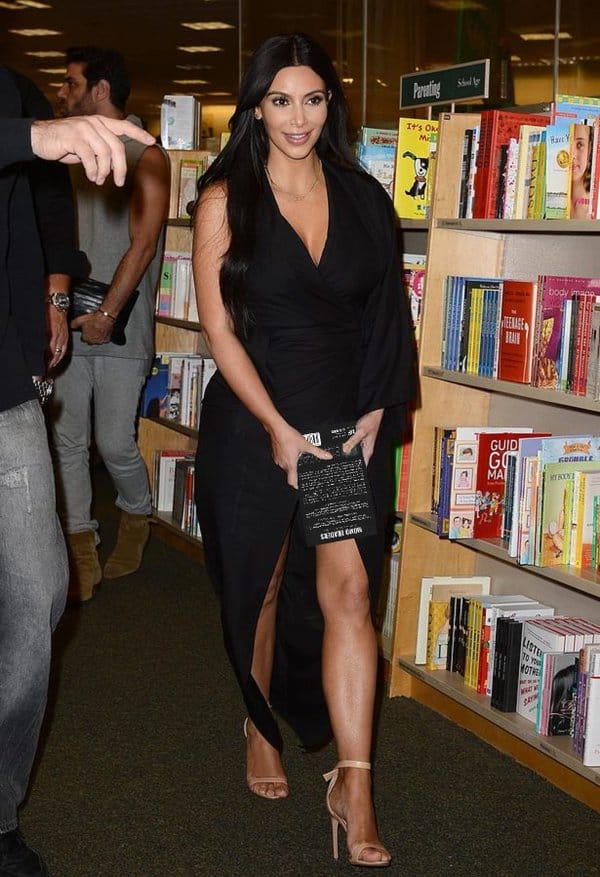 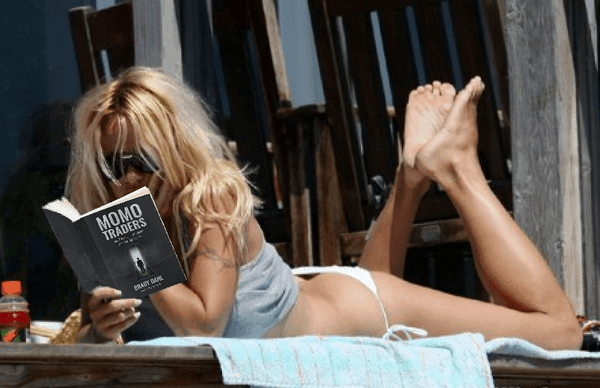 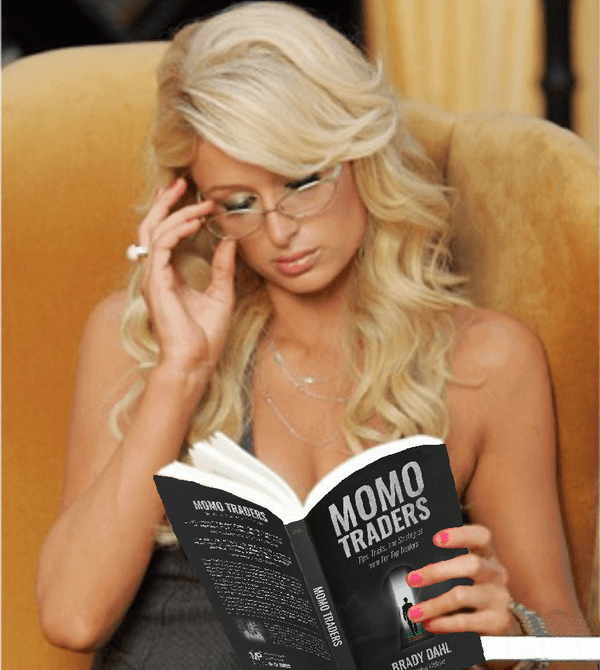 But, best of all, the response on Twitter has been amazing!

We appreciate everyone sharing their feedback. If you don't have a copy yet, you can purchase one here!

Delivered to the UK in about 3ish days ... Great stuff ?? Thanks to @modern_rock for making it appear on my Feed ✌?️ pic.twitter.com/tKhCLAhtfw

@MiltonaTrades @InvestorsLive never finished a book in my life.Always found excuses to not read,but finished half already & can't get enough

"Day traders dont fail bc they dont make money.They fail bc they lose all their money. So limit losses"Great quote @OzarkTrades @MomoTraders

@MomoTraders Just got my book in the mail - and now, can't put it down!! Amazing - a must for any trader! #MomoTraders

I found money on the ground while walking to work and reading @MomoTraders . I guess you could say the book is already paying for itself.

It finally arrived. Just in time for the weekend. pic.twitter.com/tdSUFdULaJ

I'm about half way through @MomoTraders. Damn good book!

@modern_rock @MomoTraders I started reading & love it. Most books don't go into details of strategy/screeners even desk setups! Thank you!

If I remove it from its plastic wrap to read it, the book will no longer be in mint condition! @InvestorsLive pic.twitter.com/gvatuU5fUM

Just ordered a copy of @MomoTraders to review before I open a new account. Big thanks to all the traders who collaborated on this!

The face you make when you realize that you are holding heavy artillery @MomoTraders pic.twitter.com/19U61QQj5A

@MomoTraders Haha good one! I'm on page 100 already. This book is full of excellent tactics and nuances. A great review of different styles!

@InvestorsLive @MiltonaTrades @MomoTraders can't wait till Christmas to read my copy! Told my wife it was the only thing I wanted

Reading this book for a second time. It's always relevant @MomoTraders pic.twitter.com/ca5jirgbNU

This was really great to hear after all the work. Thanks!! http://t.co/6m7ayLUNH5 pic.twitter.com/bNOOqsUqE0

@elkwood66 enjoying your chapter in @MomoTraders "understand that when a stock fails, people are ready to bail". Well said

Today's load, off to find, entertain, and enlighten their owners... https://t.co/EIunq9RFRH ... pic.twitter.com/PtDUQBm78L

https://t.co/EIunq9A509 is "one of the best investments of my life"... pic.twitter.com/BuGCtzamGj

https://t.co/EIunq9A509 has "more grit" than the other trading books out there... Thanks, Joanne! pic.twitter.com/8TQseMs22N

Thanks! Love the #GameChanger hashtag! pic.twitter.com/XKLCD0CGCz

Have received some very nice messages lately. Thank you! pic.twitter.com/spRv4FvddA

Just finished the 'Momo Traders' book. Fantastic insights from great traders. When is the movie version coming out? pic.twitter.com/pHu4rPnuxO

Just ordered @MomoTraders can not wait to read this thing . A lot of awesome traders in it @InvestorsLive

Reading @MomoTraders to gain motivation and knowledge. Best book i ever bought im sure.

@MomoTraders I am not a book person. But I absolutely love reading it.
This is my best purchase overall.Thank you

@MomoTraders Just finished another chapter, This book is to trading what the Bible is to Religion.

Just got it in the mail. I know what my plans are for this weekend... study. @InvestorsLive @modern_rock pic.twitter.com/yJbttB2prC

@InvestorsLive just picked up Momo Traders. Just waiting for it so I can sit on the toilet and read it front to back. #whereiread

Really enjoyed this read, thanks for the heads up @bciebell #momotraders Burned through it in no time... pic.twitter.com/KZ7PGjxeom

@MomoTraders great book, wish it came out summer of 2014, woulda saved me $200k in losses on $LAKE, $APT and $NDRM. #traderhindsight.

@MomoTraders I'm rereading this awesome book on the NYC subway & all these ppl from Wall St. get on & are commenting on it too!

Christmas gifts at their best when spoiling myself! @MomoTraders and #ChristerOlsson sharing their thoughts pic.twitter.com/3pysdoasZZ

Finished this fantastic book so I don't have to rely on winning powerball. Gr8 job writing it @MiltonaTrades pic.twitter.com/amg6xO3y3Y

Loving pg 46-47 of @MomoTraders . Very interesting. Had to read it 3 times. #hocuspocus

@Skywalker2l @modern_rock pick up the book @MomoTraders and read up on how they got to where they are. Truly inspiring!

The essentials for getting my brain back in the right place! @InvestorsLive @steenbab @MomoTraders pic.twitter.com/7x6Du3ydLn

Read our Book Review of @MomoTraders , a “must have” addition to any aspiring Day Trader’s library https://t.co/CBDg0Uwkt7

A great week for me, +4546! Will be spending more time with Momo Traders this weekend. Have a good one pic.twitter.com/5TFRLet9iJ

thanks to @MomoTraders I'm letting my winner develop and taking some profits along the way. $FB up 13% on day profits taken so I'm short

"Working harder will not make an opportunity appear. It's either there to found or it doesn't exist" - @lx21 @MomoTraders

"Every bad trade gives me the learning experience necessary for my winning trades"
Gold pic.twitter.com/XN4R5UPSlF

If you're looking for a great trading book, http://t.co/sdlNU68YRb the place to go! Has my story and stories of far better traders than me!

Finished chapter 1 @momotraders . My takeaway @lx21 Is a genius and works harder then anyone I have seen. http://t.co/OyNkuf8MTG

+$6,185.90… Thanks $AVXL and @MomoTraders book! Those interviews gave me confidence to size in on this opportunity! pic.twitter.com/2nS6yVs5Qf

just got it in my mailbox.. looking forward to it!! @MomoTraders pic.twitter.com/UHghnw80Kv

I never wanted to give an interview until this book for charity @MomoTraders buy a copy at https://t.co/LmXXrcus6c pic.twitter.com/jakqYkXtro

@InvestorsLive @MomoTraders after a morning of trading green in chat, time for some #learning pic.twitter.com/TV5DcJa6UP

Time to bust out another chapter of @momotraders during the lull. pic.twitter.com/TxLUeVDvVq

@MomoTraders a must read! I'm 4 chapters in and it's hard to put down. Thx for your insight @lx21 @elkwood66 @DerrickJLeon @OzarkTrades !!!

@MomoTraders Just finished it! Truly an amazing book. There is something for everyone in this book! Thank you to all of the contributors!

@MomoTraders @modern_rock page 139 has one of the most epic plays i've read all around, learn it to do it "your way"!

Just read the @modern_rock chapter in @MomoTraders book, great insights, awesome story. TONS of highlights and notations made on the pages!

@elkwood66 love your story. Stock market bad ass. I now picture you trading with a leather cut and some gloves. @MomoTraders

Just got through the @lx21 chapter on @MomoTraders book, great insights. Thanks to all involved in putting it together

@MomoTraders very good book. A must read for a trader! pic.twitter.com/pEX0XPMxVW

This Thanksgiving I'm grateful for all the traders from book @MomoTraders. Read it to take your game to the next level.

@MomoTraders @modern_rock best and yet super cheap investment I have ever made!

Got @MomoTraders for my birthday! Will be doing a detailed book review for https://t.co/ZzYycOFpSx. Stay tuned. pic.twitter.com/hzR3LWYTdh

@MiltonaTrades I think I highlighted every page. The inside of the book is now purely yellow with chicken scratch. Great job man!!!

Super impressed with @MomoTraders Didn't think stock people would know how to write, but was so wrong. Will reread many times in the future

I am truly upset I read @MomoTraders because now I have nothing else good to read! Time to read it again.

@MomoTraders @elkwood66 @InvestorsLive this read is crucial to any aspiring trader. I highly recommend. Thank you! pic.twitter.com/VRpmXLV5kl

@lx21 @MomoTraders wow what a great first chapter already got my post its out !!! .. 9 more to go ! pic.twitter.com/a7msJLgHcM

@vybzmilo @MomoTraders @InvestorsLive Good read justified the $30 price. A great read however, can change your life. This is a GREAT book!

@tbohen @MomoTraders @DerrickJLeon @OzarkTrades @YouTube A must read for traders at any level. I'm reading it for the second time.