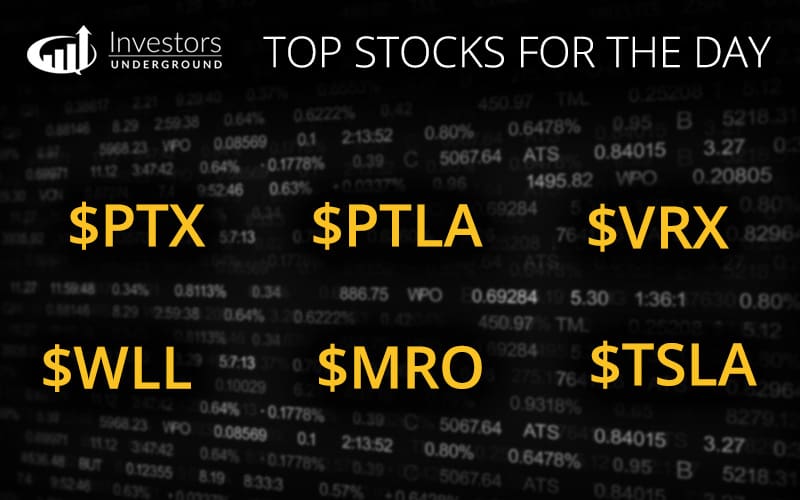 Don't forget to check out the free chat logs we sent out yesterday! If you want an even closer look at chat, join us!

PTX great short this morning, they were bid propping with 200k shares trying to keep it up for a third day but this ended up just being a dead cat bounce with some emails and text that went out - got short on offers out of the gate and rode it nicely down. Have 1/4 left great trade! Hope some nailed with the idea on twitter.

PTLA had a great entry on the morning parabolic immediately nailed about $1/share but I wanted more, was a bit too patient it snapped back and I ended up losing $1 a share let it peak out a few more times got short $21.70s and road it back down. Great trader today but could have been a bit less greedy and been up a whole lot more on this thing.

VRX been sitting short since mid morning started $32.40-20 range and added to winner have since covered partial letting it fade away as far as it can. If new trend forms will cover up.

WLL MRO TSLA FCX these four were my main watches on days like today. I prepare the best looking charts that are down the most that have the biggest markets - in other words not thin names that could be choppy but stocks that have such big markets anytime there is a gap down in the markets but a BIGGER gap down in select momentum names those are my focus - nailed WLL but missed entry on TSLA I was waiting for $213s and $214s. I snagged FCX on the washout as well. REACTIVE trades for scalps both continued. MRO currently snagged a few for 401K along with VCEL swing trades only.