We had another great week at Investors Underground. Lots of new members this week - I want to take a moment to welcome everyone and remind you guys to utilize the resources we offer! Every morning at 9AM I grab the microphone and go over the trade plans that have caught my attention. What levels are of interest, what I'm looking for and what I expect. The past two weeks have been intense - clean trades without the big headaches that are usually attached.

As a reminder, Traders4ACause 2019 is only a few weeks away. Reach out to me directly for a discount code if you want to join us in Vegas!

Here's a quick recap of some of the trading activity.

Top Trades for the Week

Below are some of the top trades + insights for the week.

ROKU was a great short opportunity. We've been waiting for this unwind for awhile now. This trade thesis is a popular one and you can go back and review your trades to see how you could have applied this to other unwinds you saw last week. For me, I want to see upside action and fails - this is a great example of it.

The stock was staying heavy during pre-market, which made for a great short opportunity throughout the day. Being able to identify what makes a good entry and what makes a good level to risk is half the battle of a good trade.

Here is some of the commentary from chat and the goal for the trade ENTRY (also discussed on the microphone pre market which can be accessed via the study group page where we put the videos recorded pre market for review. 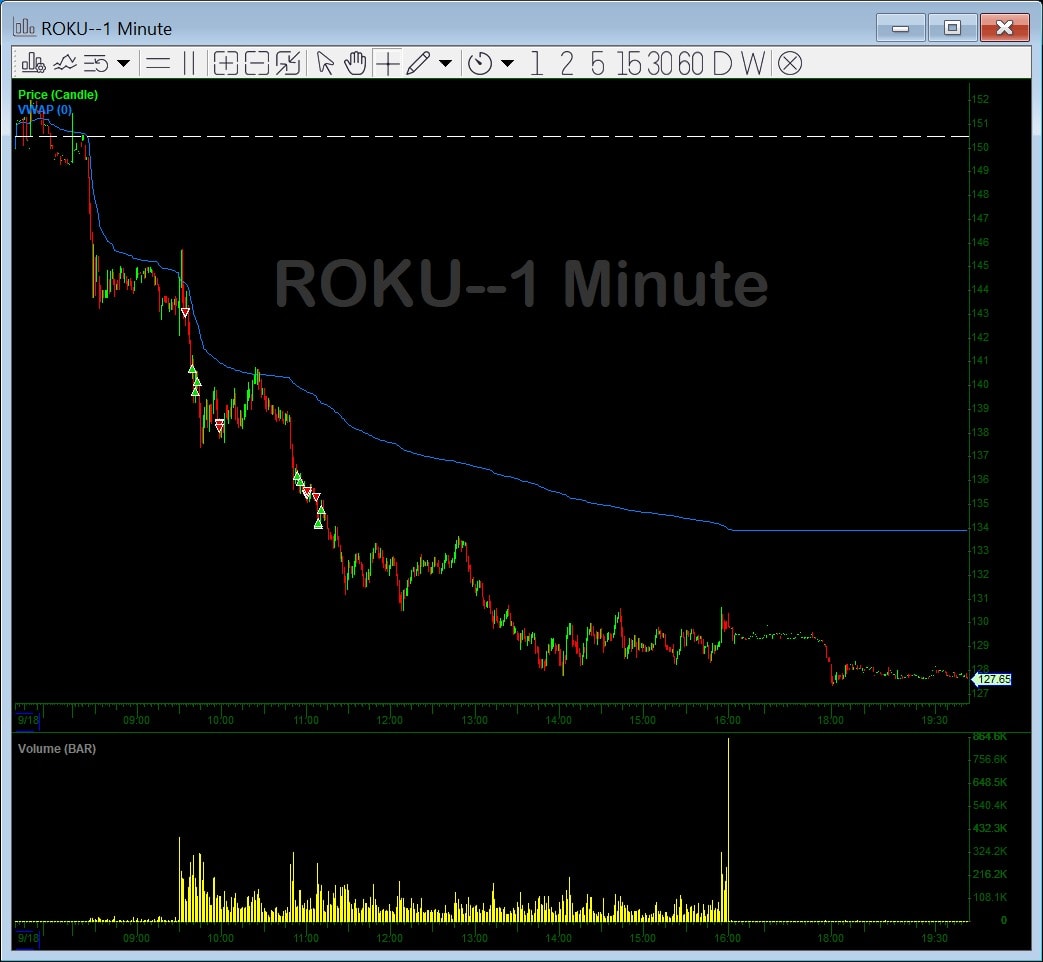 MDR trade was a perfect example of a stock that most would ignore because it's already down "a lot" but ignore what the potential is on what is already proving to be an outlier day between the price action and volume associated with the move. It was clear to me that a seller was present we saw this on September 5th on the TNAV trade made in the room - a carbon copy style trade process. We've been discussing the trend join a LOT in the room since it's working really well in this market right now.

Here's the commentary from chat: 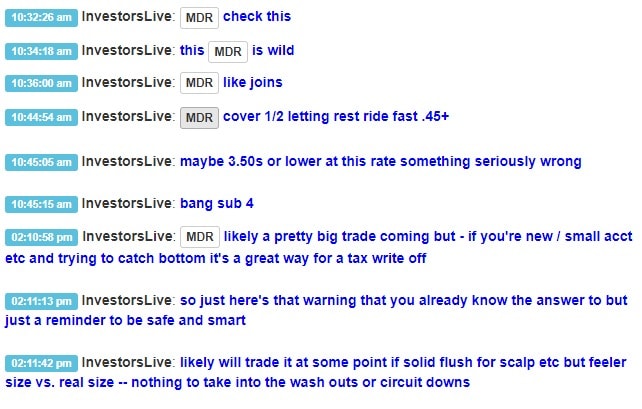 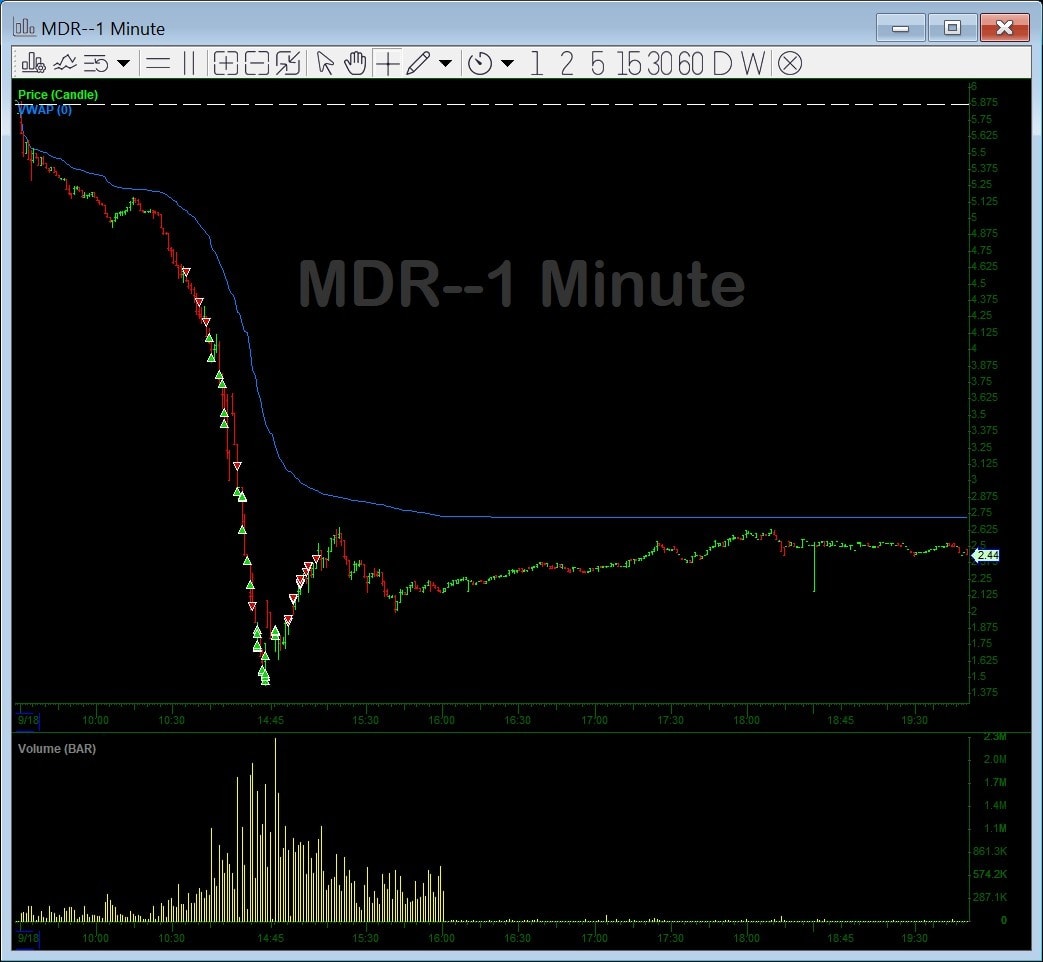 TWOU was yet another great short opportunity. We based risk on VWAP and shorted it throughout the day. For those who have been paying attention to the daily scan (or Sunday scans) you know we've been monitoring this one for a while. I won't always trade the names on scan the NEXT day but I know an opportunity when I see them and wait for them to set up and the trade to present itself. This, although it took a while of watching was worth the wait! 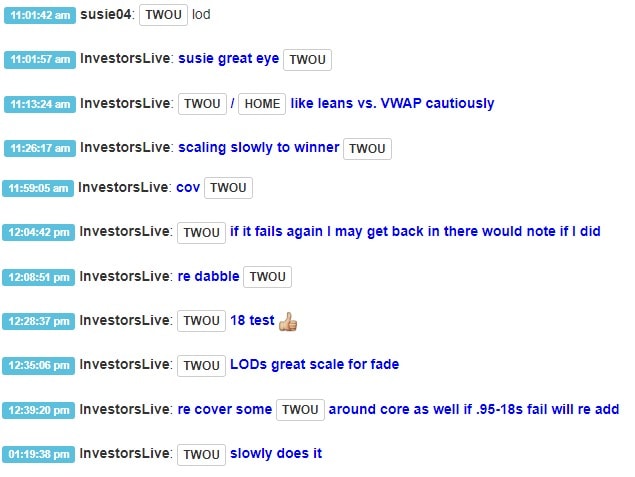 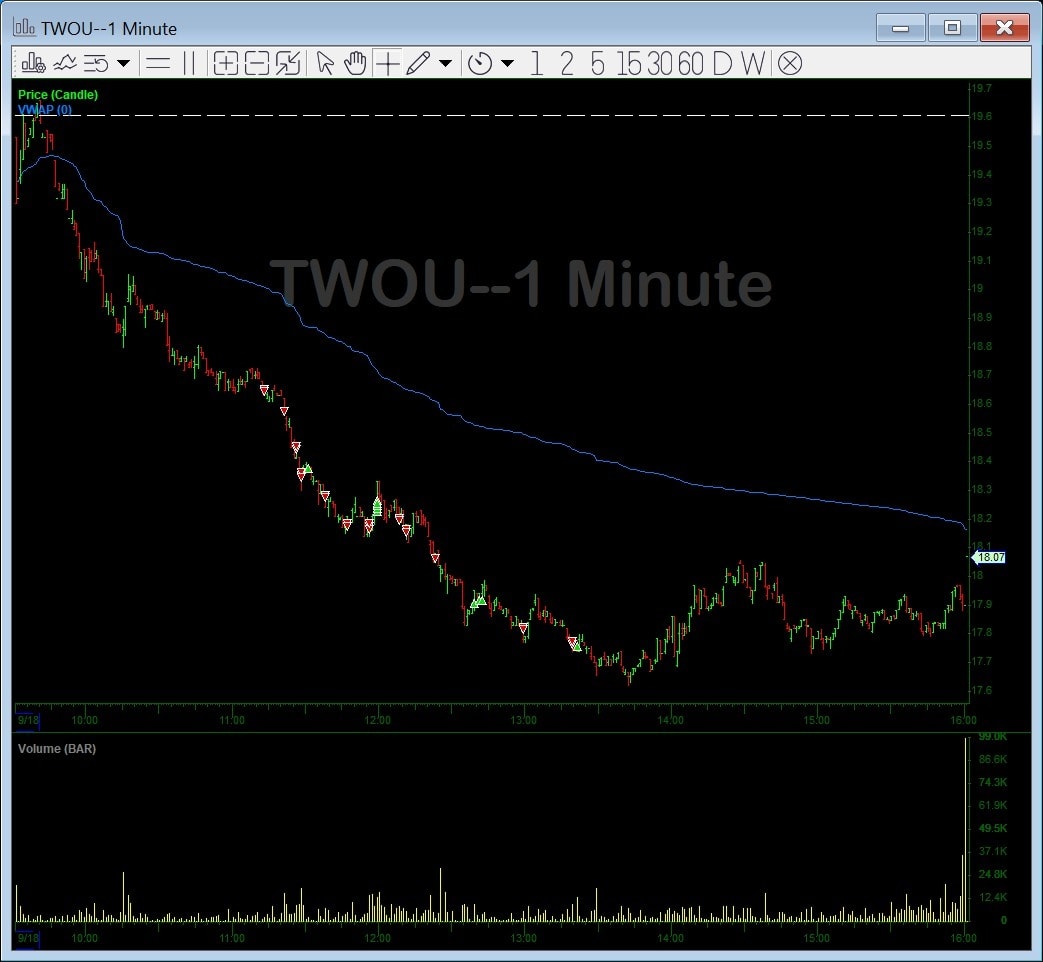 ZYNE offered some great shorts off the open. We came in with a set risk level and were able to take advantage of a great morning move. I would compare this one to the SAME commentary in the ROKU trade above. Do you see the similarities? Same concept, same game plan, different ticker. Repeat. repeat. repeat. 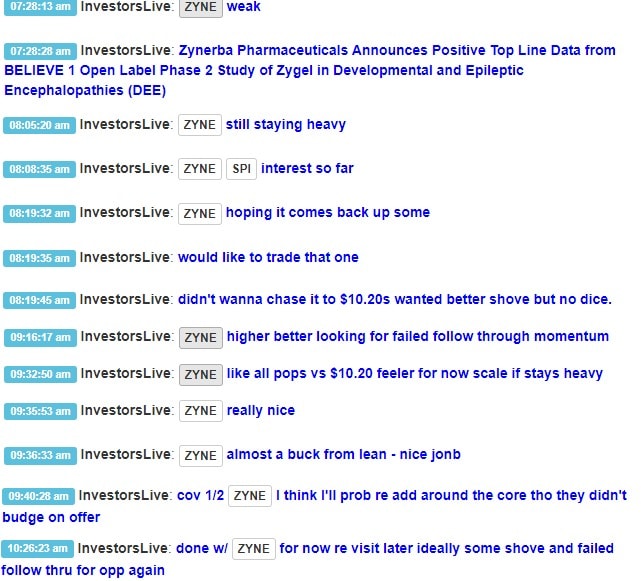 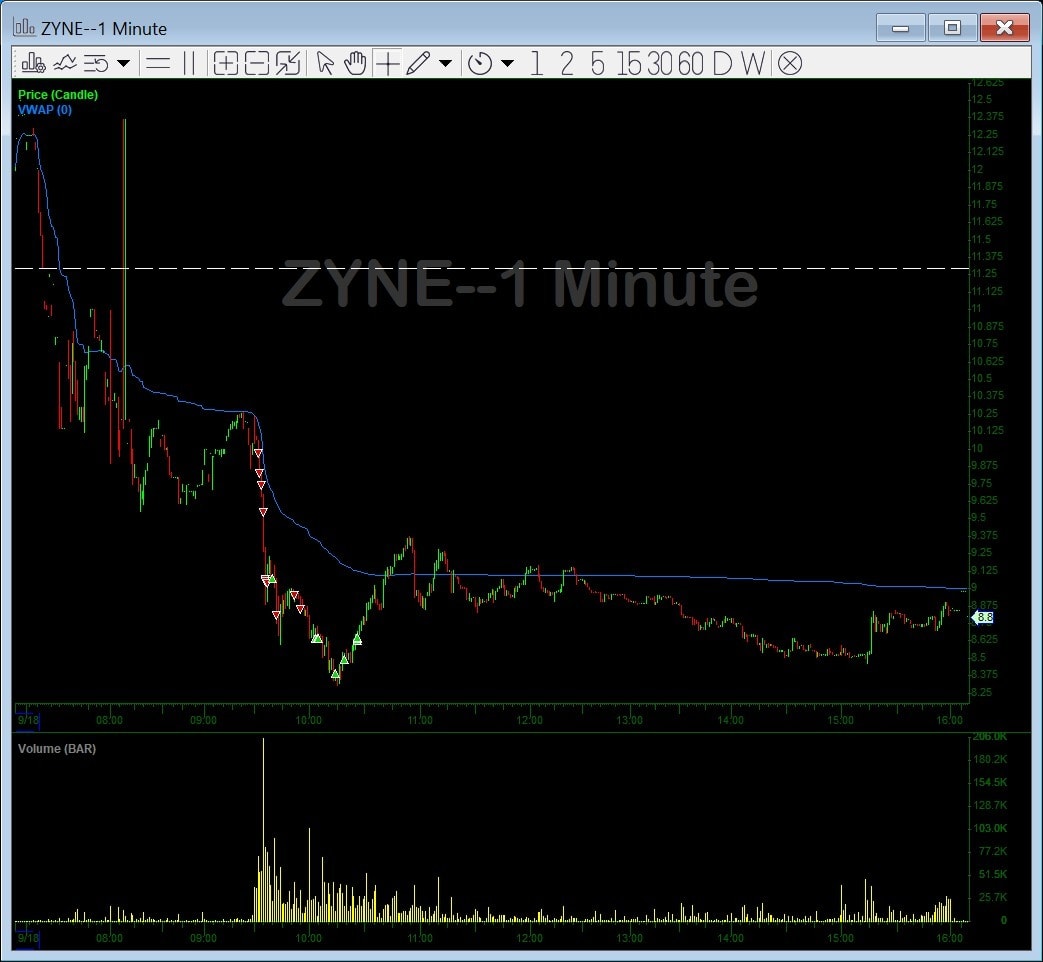 SPI was an example of a trade were patience did not pay off. Sometimes patience doesn't always work out -- but the key is not to turn a WINNER into a loser. I could have covered into flushes throughout the day but instead I was TOO patient, over stayed and covered emotionally vs. adding into strength when the trade was likely to fail. My average was about $3.85-3.95 range typically I would have covered in the $3.20 range and looked to scale back in on pops but I felt like the lack of borrow was going to create a big unwind into close. I was wrong. My goal was just like my AIM trade discussed below. Usually this trade would work, it won't always though so it's your job to stop when it doesn't.

This is a great example of me having too much of a bias I could have easily covered $3.30s or prior to VWAP but I was pretty confident it was just an end of day squeeze of the weak shorts and would slam back into close. Turns out I was the "weak short" as we watched it gap down the next day as anticipated. But, just remember - if you're too proud to stop go back through all the ones that go a bit nuts in the past with thin floats. Was it worth trying to out smart the name? And end up in a bad spot? No, profits & edge over hope! 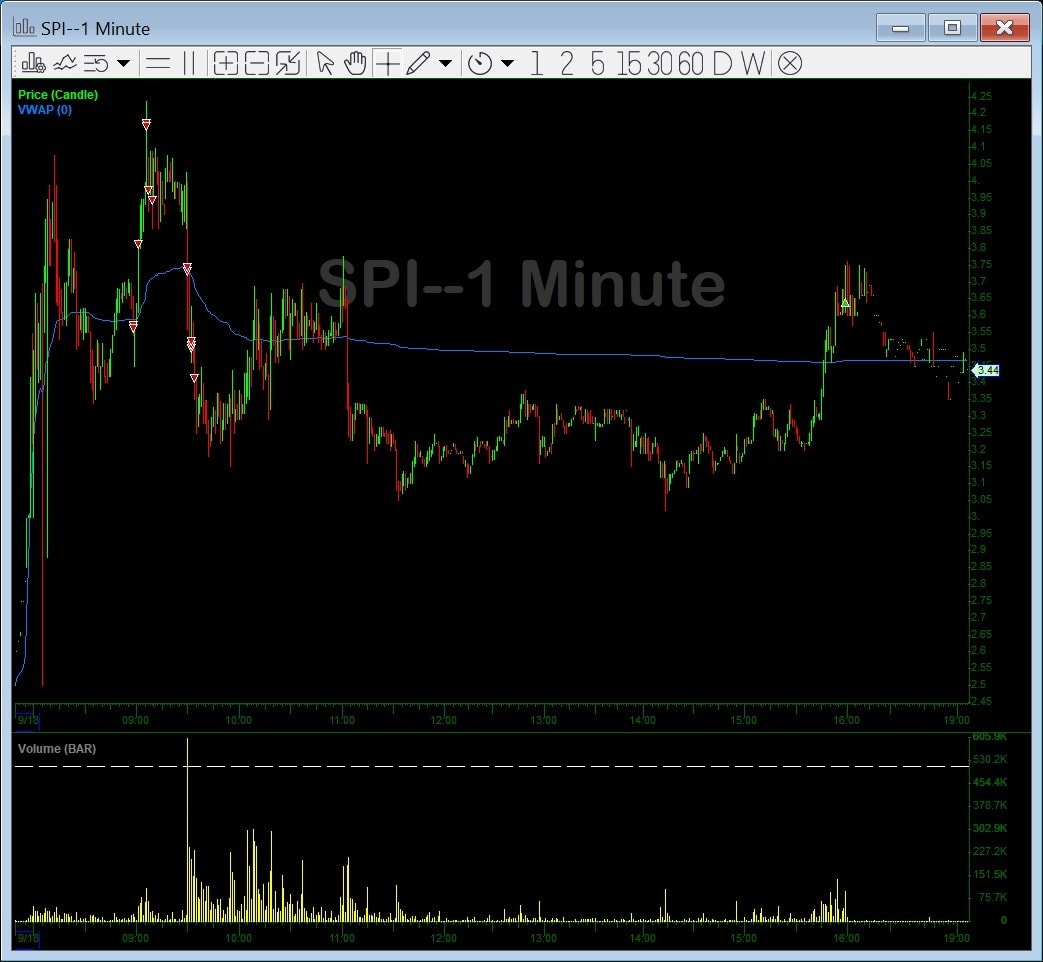 AIM trade discussed on the pre market broadcast - the break out / squeeze was happening as I started to talk so had a bit of a stutter while trying to place the trades and multi task on the rest 🙂 But, nice game plan and a SUPER SUPER hard to borrow name. Prime example of patience paying. EXTREMELY happy with my trade here. 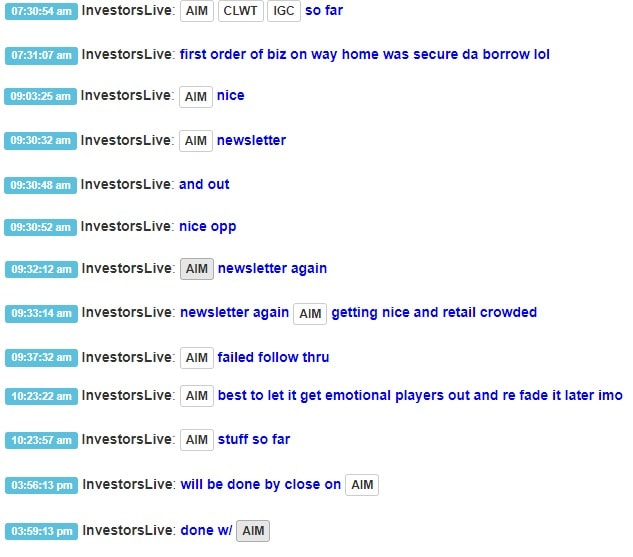 The chart paints a perfect picture of "patience" and letting a trade work out. 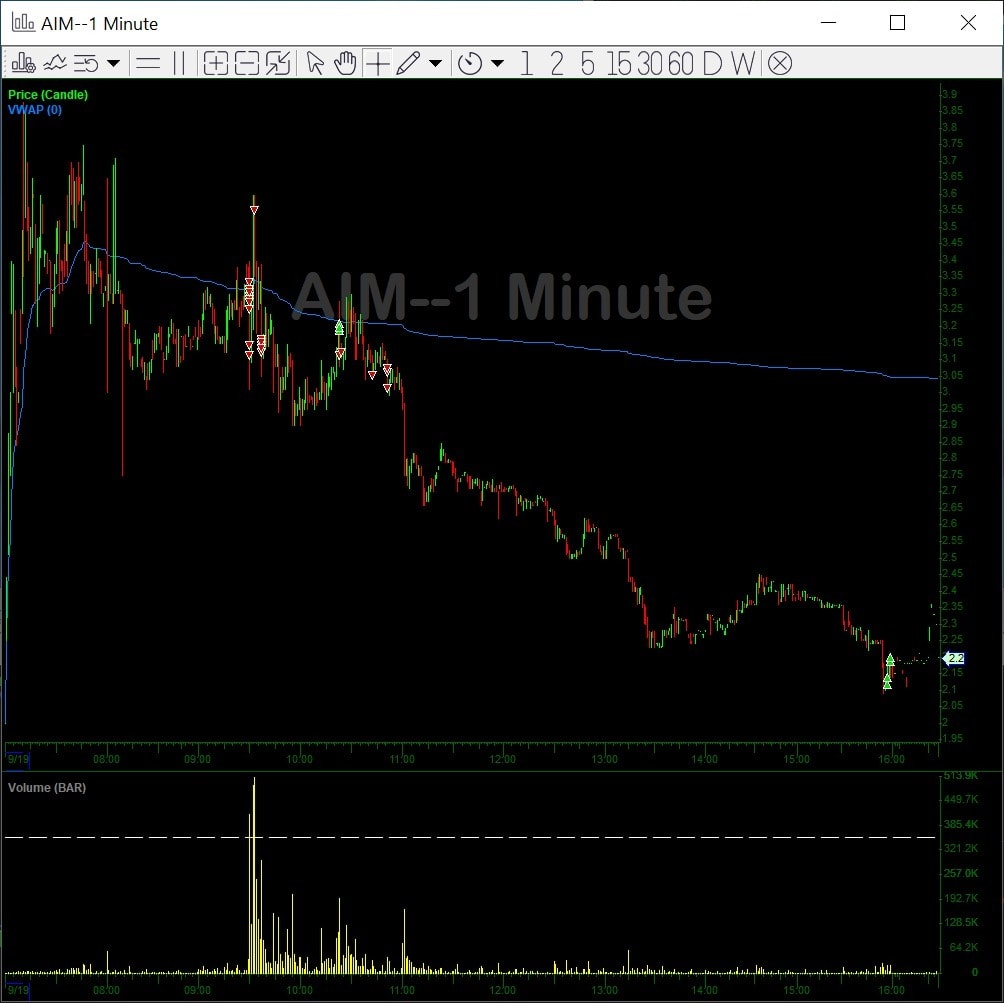 EROS provides a great example of waiting for a trade to setup, taking a position, and locking in gains along the way. We were able to take advantage of the meat of the move during a one-hour window - quick in, quick out and the best part ZERO head ache. This pattern should look VERY familiar to anyone who has spent even a minute studying our game plans. If not, you can always review the ABCD set up and what we look for! 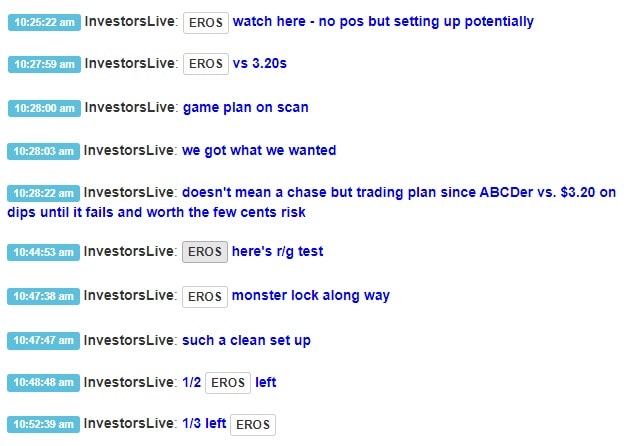 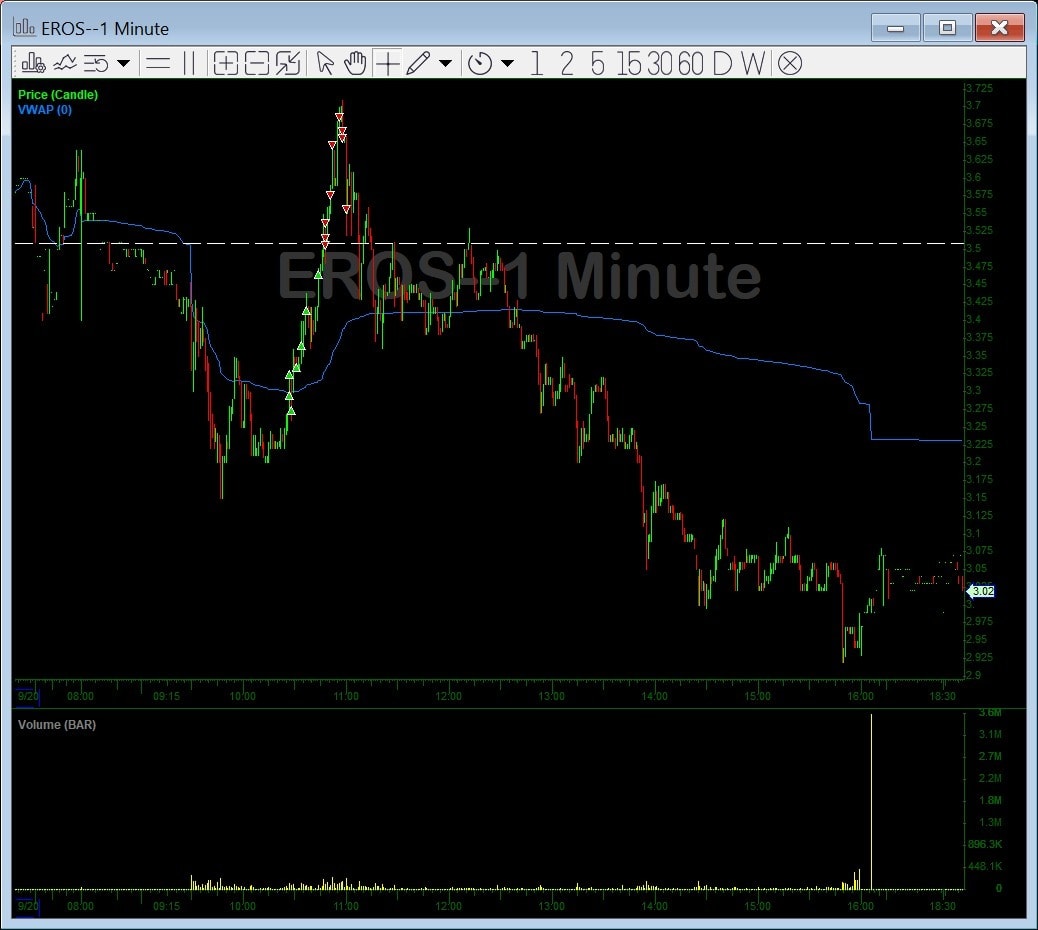 CRC is a great example of joining the trend. The stock started to dive towards the end of the trading day. It failed every time it SHOULD have bounce, so I started working on a short position. Also, trading is about adapting and understanding WHAT type of market you are in. Why was I so confident on this trade? Why did I size in? What trade did we JUST have w/ crazy debt load and fear of BK that caused it to flush? That's right the MDR trade above! 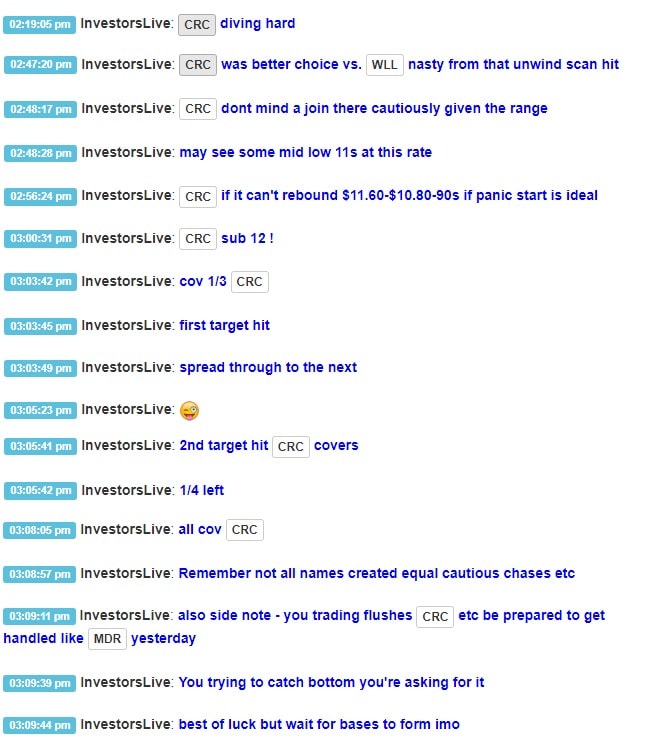 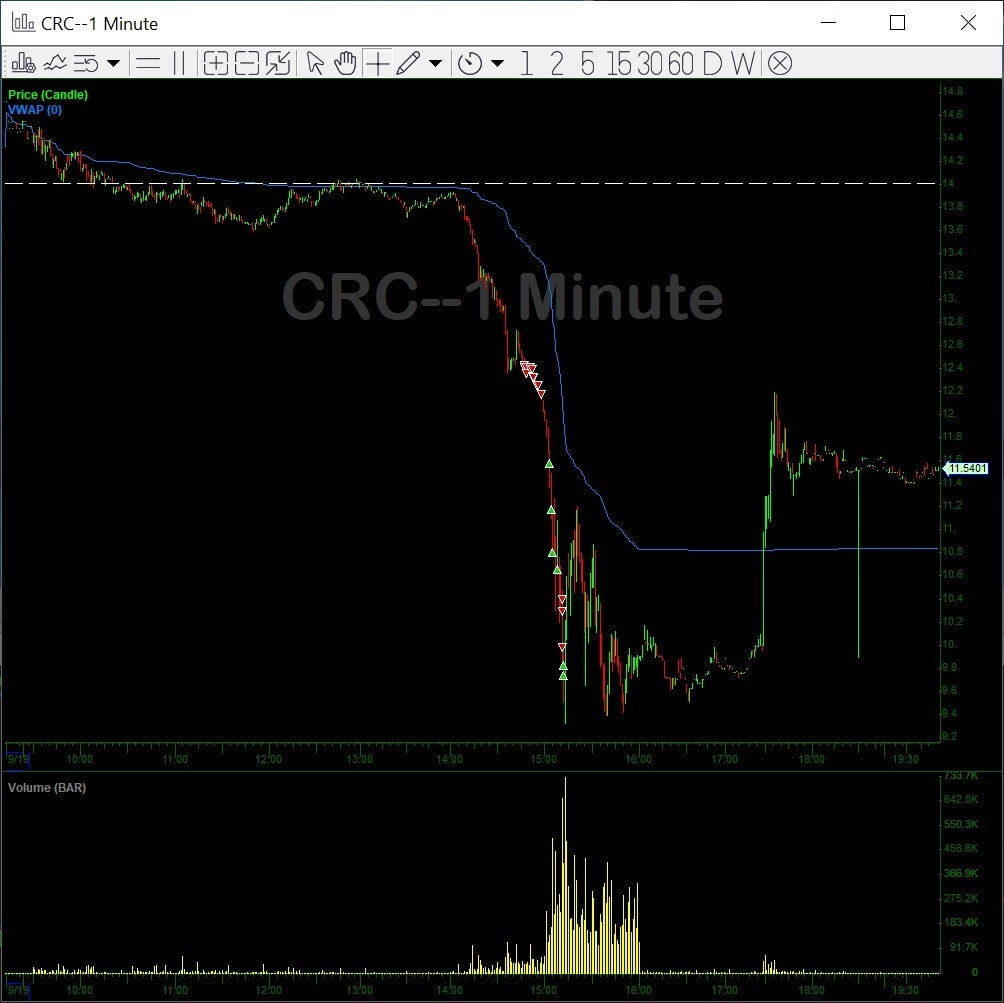 HOME is a good example of not forcing a trade. If a trade doesn't go as you expected -- don't let it occupy your head space. Focus on your game plan and if it hangs on -- MOVE ON. You head space and energy is worth a lot, if it's not paying you rent, kick 'em out! 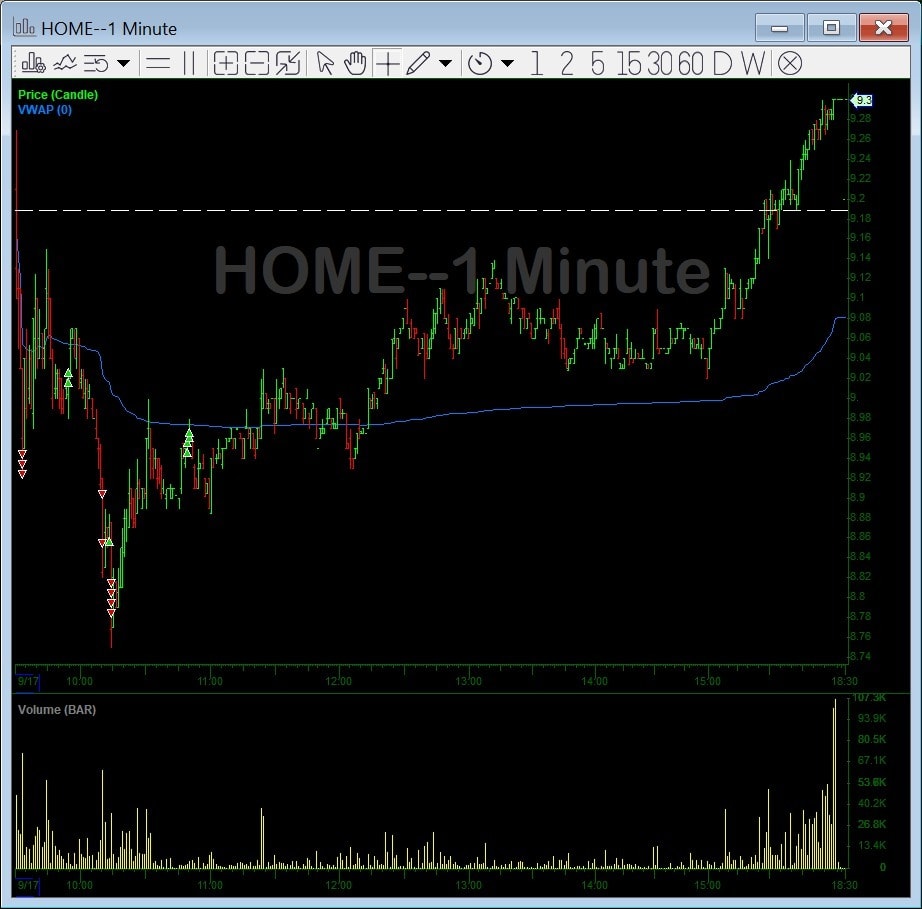 SLDB has been on radar for awhile now. I've mentioned it on numerous Sunday scans since I started the swing trade in the $5s -- it has definitely paid off for those who paid attention! Really incredible move! You can follow the tweet chain back below to see the reason why I originally swung it -- Hint: I used the *reason* in the first tweet - if it doesn't make sense that's fine, keep reviewing until it makes sense. They've been on a hot run. 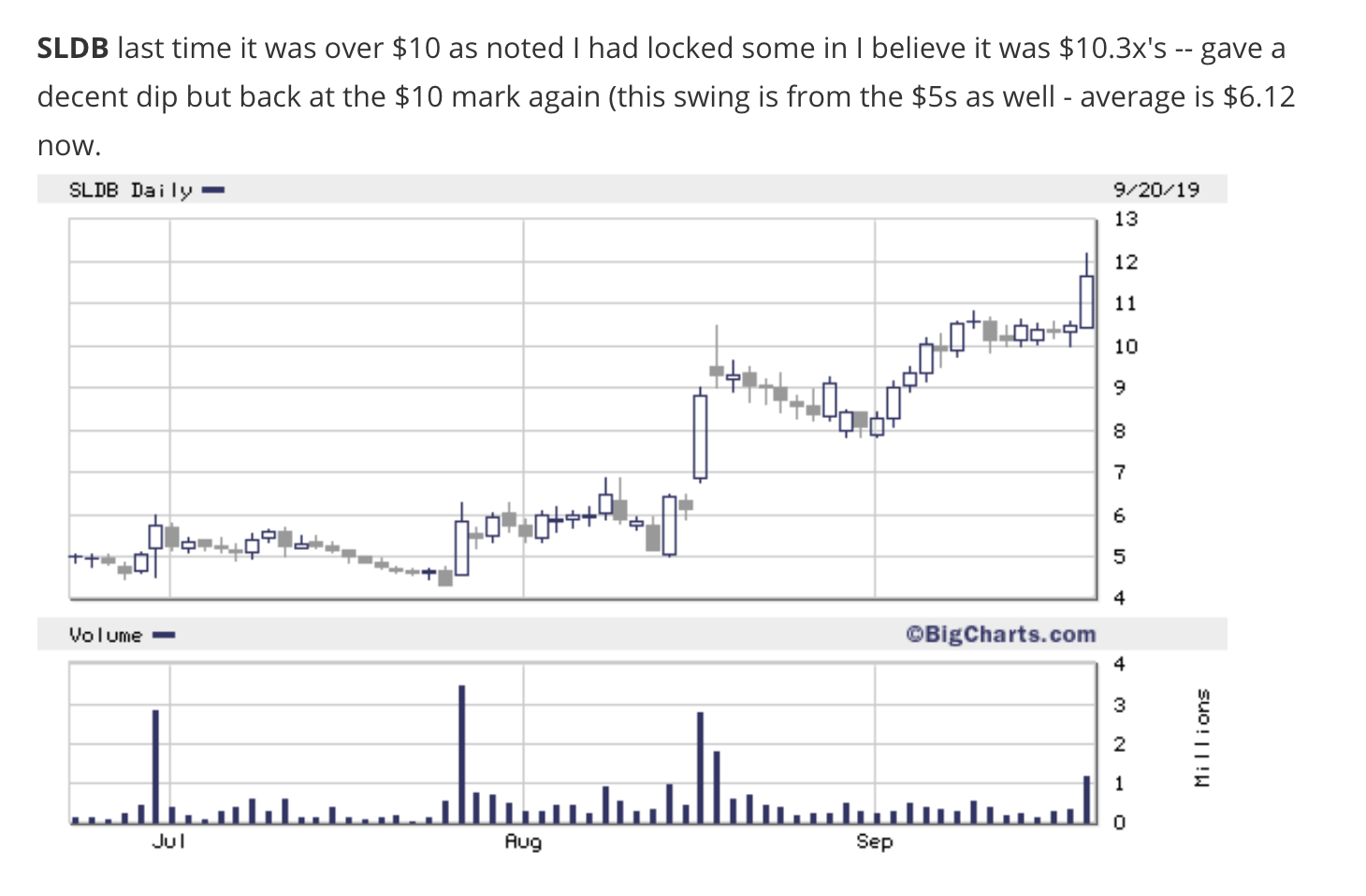 This is a great example of entering a position, letting it play out, and adding to the winning position. We've been in this one since the $5s and it has more than doubled since!

Rather perceptive break out 😂

10:21:40 am InvestorsLive: SLDB getting involved dips

It's long (avg was in $5s but had added to winner) https://t.co/nJ4yvd0BhK pic.twitter.com/MzkIcLMIPw

What Did you Trade?

What did you trade this week?

Have any questions about the trades posted above?